Bestellen Sie auch per E-Mail info@biomol.com oder FAX: 0049-40-85326022
Größere Menge gewünscht? Bulk-Anfrage
Beschreibung Produktreferenzen Analysenzertifikat Bewertungen 0
Beschreibung
This gene lies adjacent to the tumor suppressor gene CDKN2A in a region that is frequently... mehr
Menü schließen
Produktinformationen "Anti-CDKN2B, CT (CDKN2B, MTS2, Cyclin-dependent kinase 4 inhibitor B, Multiple tumor suppressor 2, p"
This gene lies adjacent to the tumor suppressor gene CDKN2A in a region that is frequently mutated and deleted in a wide variety of tumors. This gene encodes a cyclin-dependent kinase inhibitor, which forms a complex with CDK4 or CDK6, and prevents the activation of the CDK kinases, thus the encoded protein functions as a cell growth regulator that controls cell cycle G1 progression. The expression of this gene was found to be dramatically induced by TGF beta, which suggested its role in the TGF beta induced growth inhibition. Two alternatively spliced transcript variants of this gene, which encode distinct proteins, have been reported. Applications: Suitable for use in Western Blot, Immunohistochemistry, Immunofluorescence, Flow Cytometry and ELISA. Other applications have not been tested. , Recommended Dilution: Immunohistochemistry: Formalin-fixed, paraffin-embedded sections, Optimal dilutions to be determined by the researcher. Storage and Stability: Store product at 4°C if to be used immediately within two weeks. For long-term storage, aliquot to avoid repeated freezing and thawing and store at -20°C. Aliquots are stable at -20°C for 12 months after receipt. Dilute required amount only prior to immediate use. Further dilutions can be made in assay buffer. For maximum recovery of product, centrifuge the original vial after thawing and prior to removing the cap., , Note: Applications are based on unconjugated antibody. 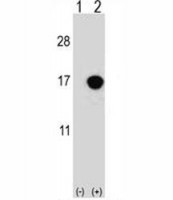 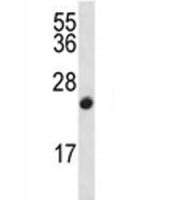