Why Is the So-Called "Hunger" Hormone Ghrelin so Important for Drug Targeting? 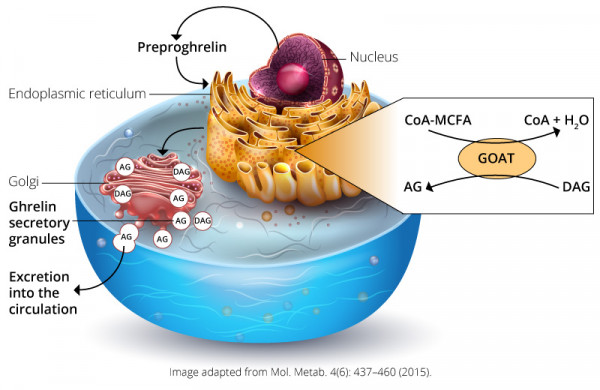 Obesity and diabetes are among the greatest public health issues in this century. Indeed, over the last 50 years, obesity has nearly tripled all over the world.1 It affects, without any distinction, all populations (children, adult, elderly people) and socioeconomic statuses. Obesity is a complex condition that poses a major risk factor for serious diet-related, non-communicable diseases, including type 2 diabetes. Human appetite and body fat accumulation are positively affected by a peptide hormone called ghrelin.2 Thus, ghrelin has become an important endocrinological target.

Ghrelin was discovered by Masayasu Kojima, Kenji Kangawa, and colleagues in 1999. It is a 28-amino acid hormone encoded by the preproghrelin gene GHRL in enteroendocrine cells of the gastrointestinal tract. This hormone stimulates growth hormone (GH) release by binding the growth hormone secretagogue receptor (GHSR) 1a in the anterior pituitary gland.3 GHSR1a is also expressed in pancreatic islets, adrenal glands, myocardium, thyroid, hypothalamus, hippocampus, and the midbrain.4 In the hypothalamus, GHSR1a is found in the arcuate nucleus (ARC) and is also co-localized in neurons expressing neuropeptide Y (Npy) and Agouti-related peptide (Agrp). These peptides are related to food intake and satiety regulation.5 For the activation of GHSR, ghrelin must be acylated by a fatty acid side chain on its serine-3 residue. This post-translational modification is achieved by ghrelin O-acyl-transferase (GOAT). This modification, mainly octanoylation and decanoylation, is required for ghrelin’s effects on systemic metabolism. Interestingly, the substrates (lipids) for GOAT-mediated ghrelin acylation are almost exclusively derived from dietary lipids. These short- to mid-chain fatty acids must be thioesterified with coenzyme A so GOAT can acylate des-acyl ghrelin into serine-3 acyl-ghrelin.6,7 Octanoyl- and decanoyl-modified ghrelin forms are the optimal ligands for activation of GHSR1a. The role of des-acyl ghrelin and acyl-ghrelin still remains unclear.4

It was found that the half-life of acyl-ghrelin in serum varies between 240 minutes in humans and 30 minutes in rats. This difference might be explained by the fact that the enzymes responsible for the des-acylation and cleavage of ghrelin differ remarkably across species.8 Most studies that have analyzed both des-acyl and acyl-ghrelin found that the majority of ghrelin in circulation is des-acylated. A receptor for des-acyl ghrelin has not been identified yet. All ghrelin in circulation is acylated. The presence of des-acyl ghrelin has been proposed to be an artifact of sample handling.9

Ghrelin secretion/administration (i.v.) leads to food intake as well as GH secretion (in vivo and in vitro).10 Because of its ability to increase food intake in mammals, ghrelin was called the "hunger" hormone, but this notion has changed with recent research. The hormone, rather, may help prepare the body for food intake by regulating energy homeostasis, gastric motility, and gastric acid production. The modulation of energy homeostasis takes place via activation of orexigenic neural circuits. Furthermore, it was found that ghrelin affects glucose metabolism, modulation of sleep and taste, suppression of brown fat thermogenesis, as well as protects against muscle atrophy and improves cardiovascular functions (Figure 1).4 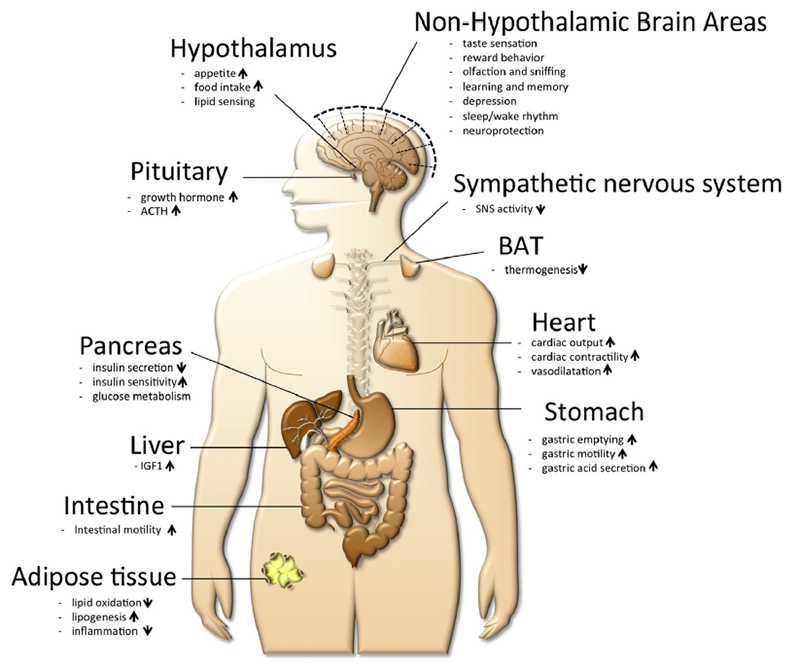 An additional important role of ghrelin is its ability to stimulate key enzymes that promote fatty acid storage and may lead to adiposity. It is assumed that ghrelin acts a messenger between body energy stores and the brain. Thereby, this mechanism can be independent from food intake, mediated by the sympathetic nervous system.11 There are four mechanisms known to increase ghrelin-induced adiposity:10

Through an understanding of these ghrelin-induced metabolic mechanisms and the involved compounds, therapeutics targeting metabolic function can be considered. This could also help explain why ghrelin-treated animals are susceptible to accumulating more fat under a high-fat diet regimen than saline-treated animals. It also provides insights for the possible causes that lead to metabolic dysfunction in obese individuals.10 Interestingly, a deletion of the ghrelin gene as well as the GSH-R gene in mice did not show any differences in weight gain or eating behavior compared to the wild-type genotype.10 Ghrelin-deficient mice also responded the same to fasting and diet-induced obesity. The effect of ghrelin on the development of obesity and associated metabolic disorders was observed in young mice. 18-week-old mice were resistant to diet-induced obesity.12 Thus, the future of obesity research would benefit from further research on ghrelin-induced metabolic energy homeostasis. Now that we know where and how ghrelin acts, in some cases, a better understanding of its role in energy regulation is necessary to develop new diagnostic and therapeutic approaches.

Sampling tubes with PHMB
From 189.00€ *
This website uses cookies, which are necessary for the technical operation of the website and are always set. Other cookies, which increase the usability of this website, serve for direct advertising or simplify interaction with other websites and social networks, will only be used with your consent. More information
Decline Accept all Configure