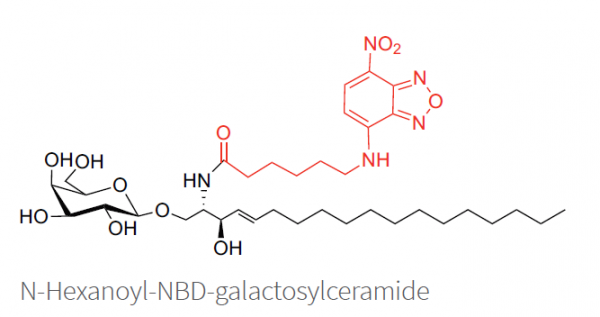 Cerebrosides (galactosylceramides) are primarily found in neuronal tissues and are the major glycosphingolipids in the central nervous system. They are the largest single component of the myelin sheath of nerves and seem to act, along with other molecules, to form part of the structural support of the myelin sheath.1 Cerebrosides are involved in a very wide range of biological activities such as cell agglutination, intracellular communication, cellular development, and have antitumor/cytotoxic effects.2 Galactocerebroside can be metabolized into sulfatide which is also abundant in the nervous system and myelin sheaths. Due to the relatively high melting point of cerebrosides (much greater than physiological body temperature), they have a paracrystalline structure. Krabbe disease (globoid cell leukodystrophy) is characterized by a deficiency in the enzyme galactocerebrosidase, which is responsible for degrading galactocerebroside. This leads to an accumulation of cerebroside and psychosine, which is very cytotoxic and can result in demyelination of nerves and loss of axonal conductivity.3

NBD-galactosylceramide is a fluorescent cerebroside with an excitation/emission maximum of ~466/539 nm. NBD (7-nitrobenz-2-oxa-1,3-diazol-4-yl) has long been one of the most common fluorescent lipid labels. Studies have shown that NBD-labeled lipids mimic their natural lipid counterparts very well in most applications.4 The NBD group demonstrates only a small influence on lipid adsorption into cells and cellular membranes, especially when the fatty acid is a short chain. This fluorescent analog is generally comparable to galactosylceramide in many biological functions.

Psychosine, synthetic
236.00€ *
This website uses cookies, which are necessary for the technical operation of the website and are always set. Other cookies, which increase the usability of this website, serve for direct advertising or simplify interaction with other websites and social networks, will only be used with your consent. More information
Decline Accept all Configure