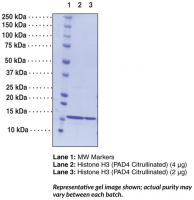 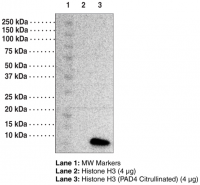 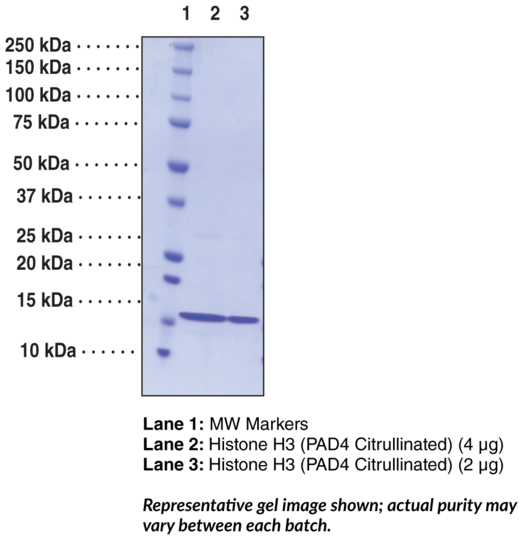 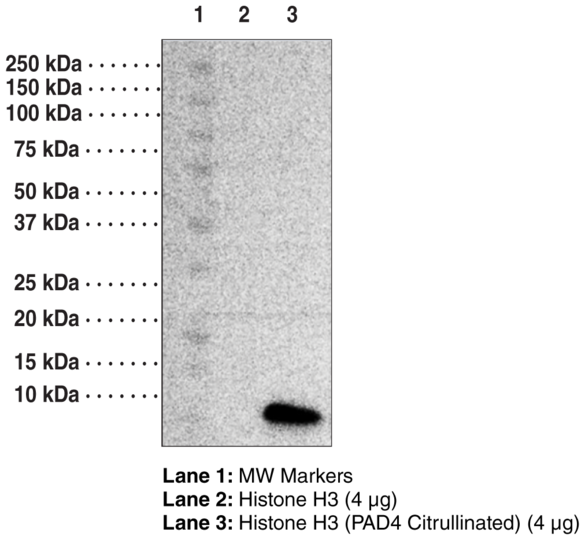 You can also order using info@biomol.com or FAX at +49-40-85326022
Larger quantity required? Request bulk
Description Product Citations Certificate of Analysis Reviews 0
Description
A nucleosome is the basic repeating unit of chromatin in which 146 base pairs of DNA wrap twice... more
Close menu
Product information "Citrullinated Histone H3 (human recombinant)"
A nucleosome is the basic repeating unit of chromatin in which 146 base pairs of DNA wrap twice around a histone octamer consisting of two copies of each of the core histones, H2A, H2B, H3, and H4. The combination of two H2A/H2B dimers and one H3/H4 tetramer create the nucleosome core. Histone H3 undergoes many modifications which include acetylation, methylation, and phosphorylation that are important for regulation of gene transcription. Citrullination is another important post-translational modification that is catalyzed by peptidylarginine deiminase 4 (PAD4) and PAD2. Hypercitrullination of histones leads to the development of neutrophil extracellular traps (NETs), which are a part of the inflammatory response. Neutrophils release these NETs to trap and eradicate bacteria and fungi. Failure to clear citrullinated proteins and NET components following inflammation can result in the production of autoantibodies and anti-citrullinated protein antibodies. The persistence of these antibodies and citrullinated proteins is associated with a number of human diseases including rheumatoid arthritis, systemic lupus erythematosus, Alzheimer's disease, and multiple sclerosis. This product contains purified Histone H3 (human, recombinant) (Cay-10263) that has been modified with PAD4 enzyme, which is removed by affinity chromatography after the reaction. Synonyms: H3, H3C1, Histone H3.1. Purity: >95% estimated by SDS-PAGE. Protein Identity Confirmed by Mass Spec: Yes. Source: Recombinant protein expressed in E. coli, citrullinated with recombinant human PAD4. MW: 15.5 kDa. Formulation: A solution in PBS, pH 7.4. Applications: Immunoreactive with anti-citrulline antibodies by Western blot and ELISA. UniProt Accession #: P68431.

Caution
Our products are for laboratory research use only: Not for administration to humans!
Product Citations
Information about the product reference will follow. more
Close menu
Certificate of Analysis
You will get a certificate here
Go back
Log in or register to request a certificate of analysis.
Reviews 0
Read, write and discuss reviews... more
Close menu
Customer review for "Citrullinated Histone H3 (human recombinant)"
Write a review
Log in or register to review a product.
Similar products
Similar products

Histone H3 (K27M), His-tag
605.00€ *
Viewed
This website uses cookies, which are necessary for the technical operation of the website and are always set. Other cookies, which increase the usability of this website, serve for direct advertising or simplify interaction with other websites and social networks, will only be used with your consent. More information
Decline Accept all Configure