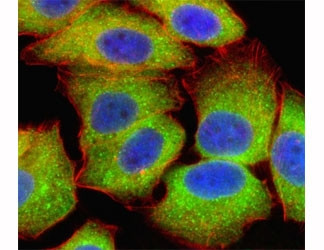 Bestellen Sie auch per E-Mail info@biomol.com oder FAX: +49-40-85326022
Größere Menge gewünscht? Bulk-Anfrage
Beschreibung Produktreferenzen Analysenzertifikat Bewertungen 0
Beschreibung
In 1X PBS, pH 7.4, with 0.09% sodium azide. NFKB1 or NFKB2 is bound to REL, RELA, or RELB to form... mehr
Menü schließen
Produktinformationen "Anti-RELA"
In 1X PBS, pH 7.4, with 0.09% sodium azide. NFKB1 or NFKB2 is bound to REL, RELA, or RELB to form the NFKB complex. The p50 (NFKB1)/p65 (RELA) heterodimer is the most abundant form of NFKB. The NFKB complex is inhibited by I-kappa-B proteins (NFKBIA or NFKBIB), which inactivates NFKB by trapping it in the cytoplasm. Phosphorylation of serine residues on the I-kappa-B proteins by kinases (IKBKA or IKBKB) marks them for destruction via the ubiquitination pathway, thereby allowing activation of the NFKB complex. Activated NFKB complex translocates into the nucleus and binds DNA at kappa-B-binding motifs. [OMIM] Protein function: NF-kappa-B is a pleiotropic transcription factor present in almost all cell types and is the endpoint of a series of signal transduction events that are initiated by a vast array of stimuli related to many biological processes such as inflammation, immunity, differentiation, cell growth, tumorigenesis and apoptosis. NF-kappa-B is a homo- or heterodimeric complex formed by the Rel-like domain-containing proteins RELA/p65, RELB, NFKB1/p105, NFKB1/p50, REL and NFKB2/p52 and the heterodimeric p65-p50 complex appears to be most abundant one. The dimers bind at kappa-B sites in the DNA of their target genes and the individual dimers have distinct preferences for different kappa-B sites that they can bind with distinguishable affinity and specificity. Different dimer combinations act as transcriptional activators or repressors, respectively. NF-kappa-B is controlled by various mechanisms of post-translational modification and subcellular compartmentalization as well as by interactions with other cofactors or corepressors. NF-kappa-B complexes are held in the cytoplasm in an inactive state complexed with members of the NF-kappa-B inhibitor (I-kappa-B) family. In a conventional activation pathway, I-kappa-B is phosphorylated by I-kappa-B kinases (IKKs) in response to different activators, subsequently degraded thus liberating the active NF-kappa-B complex which translocates to the nucleus. NF-kappa-B heterodimeric p65-p50 and p65-c-Rel complexes are transcriptional activators. The NF-kappa-B p65-p65 complex appears to be involved in invasin-mediated activation of IL-8 expression. The inhibitory effect of I-kappa-B upon NF-kappa-B the cytoplasm is exerted primarily through the interaction with p65. p65 shows a weak DNA-binding site which could contribute directly to DNA binding in the NF-kappa-B complex. Associates with chromatin at the NF-kappa-B promoter region via association with DDX1. Essential for cytokine gene expression in T-cells (PubMed:15790681). [The UniProt Consortium] 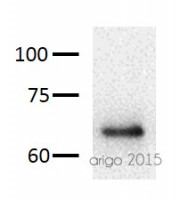