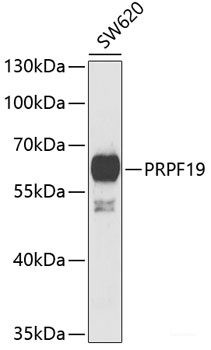 Bestellen Sie auch per E-Mail info@biomol.com oder FAX: +49-40-85326022
Größere Menge gewünscht? Bulk-Anfrage
Beschreibung Produktreferenzen Analysenzertifikat Bewertungen 0
Beschreibung
Protein function: Ubiquitin-protein ligase which is a core component of several complexes mainly... mehr
Menü schließen
Produktinformationen "Anti-PRPF19"
Protein function: Ubiquitin-protein ligase which is a core component of several complexes mainly involved pre-mRNA splicing and DNA repair. Core component of the PRP19C/Prp19 complex/NTC/Nineteen complex which is part of the spliceosome and participates in its assembly, its remodeling and is required for its activity. During assembly of the spliceosome, mediates 'Lys-63'-linked polyubiquitination of the U4 spliceosomal protein PRPF3. Ubiquitination of PRPF3 allows its recognition by the U5 component PRPF8 and stabilizes the U4/U5/U6 tri-snRNP spliceosomal complex (PubMed:20595234). Recruited to RNA polymerase II C-terminal domain (CTD) and the pre-mRNA, it may also couple the transcriptional and spliceosomal machineries (PubMed:21536736). The XAB2 complex, which contains PRPF19, is also involved in pre- mRNA splicing, transcription and transcription-coupled repair (PubMed:17981804). Beside its role in pre-mRNA splicing PRPF19, as part of the PRP19-CDC5L complex, plays a role in the DNA damage response/DDR. It is recruited to the sites of DNA damage by the RPA complex where PRPF19 directly ubiquitinates RPA1 and RPA2. 'Lys-63'-linked polyubiquitination of the RPA complex allows the recruitment of the ATR-ATRIP complex and the activation of ATR, a master regulator of the DNA damage response (PubMed:24332808). May also play a role in DNA double-strand break (DSB) repair by recruiting the repair factor SETMAR to altered DNA (PubMed:18263876). As part of the PSO4 complex may also be involved in the DNA interstrand cross-links/ICLs repair process (PubMed:16223718). In addition, may also mediate 'Lys-48'-linked polyubiquitination of substrates and play a role in proteasomal degradation (PubMed:11435423). May play a role in the biogenesis of lipid droplets. May play a role in neural differentiation possibly through its function as part of the spliceosome. [The UniProt Consortium] 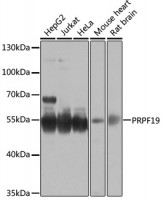