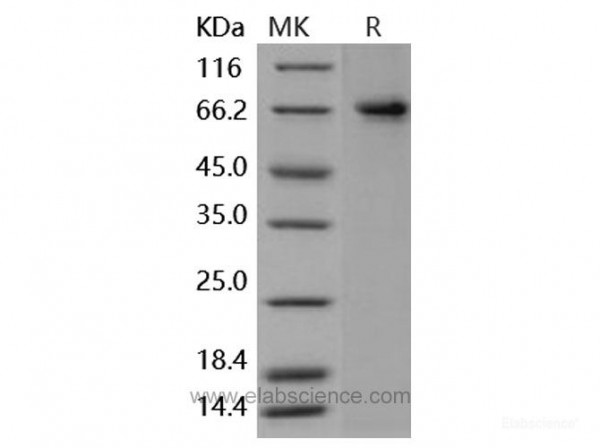 Bestellen Sie auch per E-Mail info@biomol.com oder FAX: 0049-40-85326022
Größere Menge gewünscht? Bulk-Anfrage
Beschreibung Produktreferenzen Analysenzertifikat Bewertungen 0
Beschreibung
Protein Construction: A DNA sequence encoding the human PTGS2 (NP_000954.1) (Met 1-Leu 604) was... mehr
Menü schließen
Produktinformationen "PTGS2 / COX2 / PGHS-2 Protein (His tag) (recombinant human)"
Protein Construction: A DNA sequence encoding the human PTGS2 (NP_000954.1) (Met 1-Leu 604) was fused with a polyhistidine tag at the C-terminus. Sequence: Met 1-Leu 604. Fusion tag: C-His Endotoxin: < 1.0 EU per µg as determined by the LAL method. Apparent Molecular Mass: 66 kDa. Protein function: PTGS2, also known as COX-2, is s component of Prostaglandin-endoperoxide synthase (PTGS). PTGS, also known as cyclooxygenase, is the key enzyme in prostaglandin biosynthesis, and acts both as a dioxygenase and as a peroxidase. There are two isozymes of PTGS: a constitutive PTGS1 and an inducible PTGS2, which differ in their regulation of expression and tissue distribution. PTGS2 is over expressed in many cancers. The overexpression of PTGS2 along with increased angiogenesis and GLUT-1 expression is significantly associated with gallbladder carcinomas. Furthermore the product of COX-2, PGH2 is converted by prostaglandin E2 synthase into PGE2, which in turn can stimulate cancer progression. Consequently inhibiting COX-2 may have benefit in the prevention and treatment of these types of cancer. PTGS2 is regulated by specific stimulatory events, suggesting that it is responsible for the prostanoid biosynthesis involved in inflammation and mitogenesis. It mediates the formation of prostaglandins from arachidonate Protein function: Converts arachidonate to prostaglandin H2 (PGH2), a committed step in prostanoid synthesis (PubMed:26859324, PubMed:27226593). Constitutively expressed in some tissues in physiological conditions, such as the endothelium, kidney and brain, and in pathological conditions, such as in cancer. PTGS2 is responsible for production of inflammatory prostaglandins. Up- regulation of PTGS2 is also associated with increased cell adhesion, phenotypic changes, resistance to apoptosis and tumor angiogenesis. In cancer cells, PTGS2 is a key step in the production of prostaglandin E2 (PGE2), which plays important roles in modulating motility, proliferation and resistance to apoptosis. [The UniProt Consortium] 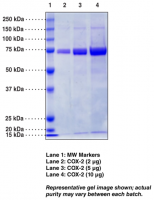