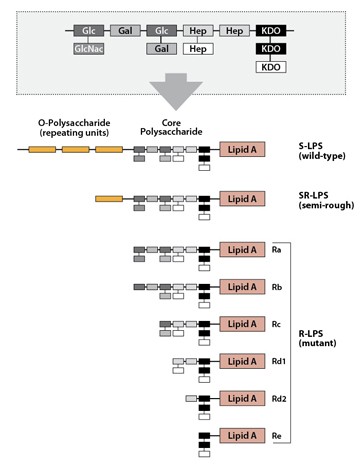 Bestellen Sie auch per E-Mail info@biomol.com oder FAX: 0049-40-85326022
Größere Menge gewünscht? Bulk-Anfrage
Beschreibung Analysenzertifikat Bewertungen 0
Beschreibung
Optimal concentration is dependent upon cell type, species, desired activation and analysis:... mehr
Menü schließen
Produktinformationen "LPS from E. coli O55:B5 (S-form) TLRpure Sterile Solution"
Optimal concentration is dependent upon cell type, species, desired activation and analysis: 0.01-1.0 µg/ml. Does not activate any TLR other than TLR4 as tested up to 50 µg/ml in relevant cellular systems (macrophages). Activation of cells by LPS is mediated by the Toll-like receptor 4 (TLR4). For optimal interaction with LPS, TLR4 requires association with myeloid differentiation protein 2 (MD-2). According to current consensus activation of TLR4 is preceded by the transfer of LPS to membrane-bound (m) or soluble (s) CD14 by LPS-binding protein (LBP). Re-form LPS and lipid A, but not S-form LPS, are capable of inducing TNF-alpha responses also in the absence of CD14. LPS, synthesized by most wild-type (WT) Gram-negative bacteria (S-form LPS), consists of three regions, the O-polysaccharide chain, which is made up of repeating oligosaccharide units, the core oligosaccharide and the lipid A, which harbors the endotoxic activity of the entire molecule. R-form LPS synthesized by the so-called rough (R) mutants of Gram-negative bacteria lacks the O-specific chain. Furthermore, the core-oligosaccharide may be present in different degrees of completion, depending on the class (Ra to Re) to which the mutant belongs. LPS are amphipathic molecules whose hydrophobicity decreases with increasing length of the sugar part. Based upon these differences, S- and R-form LPS show marked differences in the kinetics of their blood clearance and cellular uptake as well as in the ability to induce oxidative burst in human granulocytes and to activate the host complement system.