Bestellen Sie auch per E-Mail info@biomol.com oder FAX: 0049-40-85326022
Größere Menge gewünscht? Bulk-Anfrage
Beschreibung Produktreferenzen Analysenzertifikat Bewertungen 0
Beschreibung
Human fibronectin has a molecular weight of 450kD when purified in an intact form from plasma.... mehr
Menü schließen
Produktinformationen "Anti-Fibronectin"
Human fibronectin has a molecular weight of 450kD when purified in an intact form from plasma. Fibronectin is a glycoprotein synthesized in the liver for the circulating blood plasma form, and is synthesized by many mesenchymal cells, for the extracellular matrix form. It is composed of two similar, but not identical protein chains, which are linked by two disulfide linkages at the C-terminal end of the chains. The chains are composed of domains which have specific secondary structures linked together by regions which are especially susceptible to proteolytic action. For this reason, detection by immunoblot (western) may show considerable variability in the observed apparent molecular weights, which is predicated on the source of the fibronectin, and to what degree proteolysis has occurred. Bands approximately 225kD should be observed after SDS-PAGE when reducing and denaturing conditions are used. Applications: Suitable for use in ELISA, Immunoprecipitation, Immunohistochemistry and Western Blot. Other applications not tested. Recommended Dilutions: ELISA: 1:5000-1:10,000, Western Blot: 1:500-1:5000, Immunohistochemistry (Paraffin): 1:50-1:200, Immunoprecipitation: 1:100, Optimal dilutions to be determined by the researcher. Storage and Stability: May be stored at 4°C for short-term only. Aliquot to avoid repeated freezing and thawing. Store at -20°C. Aliquots are stable for 12 months. For maximum recovery of product, centrifuge the original vial after thawing and prior to removing the cap. 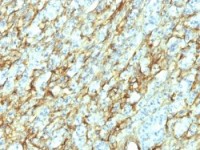 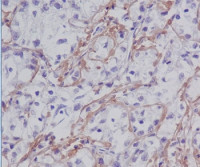