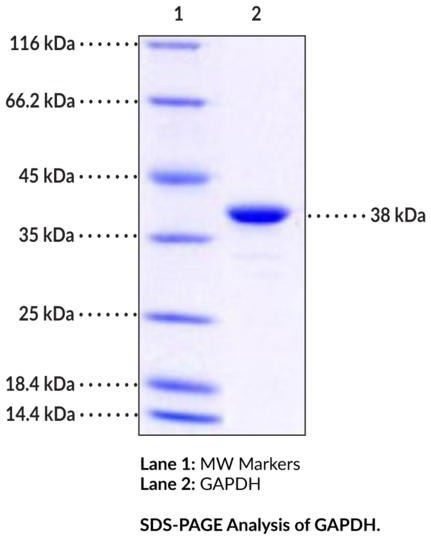 You can also order using info@biomol.com or FAX at 0049-40-85326022
Bigger quantity required? Request Bulk
Description Product Citations Certificate of Analysis Reviews 0
Description
Glyceraldehyde-3-phosphate dehydrogenase (GAPDH) is an enzyme that catalyzes the conversion of... more
Close menu
Product information "GAPDH (human, recombinant)"
Glyceraldehyde-3-phosphate dehydrogenase (GAPDH) is an enzyme that catalyzes the conversion of glyceraldehyde-3-phosphate (Cay-17865) to 1,3-bisphosphoglycerate during glycolysis and is involved in numerous additional cellular processes, including intracellular trafficking, receptor-mediated signaling, apoptosis, DNA repair, and the oxidative stress response. It exists as a tetramer and is composed of an N-terminal domain, which contains binding sites for NAD+, phosphatidylserine, RNA, and glutathione, and a C-terminal catalytic domain. GAPDH is widely expressed and primarily localizes to the cytosol, where it has roles in glycolysis and intracellular trafficking. It also localizes to the nucleus, mediating DNA integrity, gene transcription, and apoptosis, as well as to cellular membranes, where it has roles in membrane fusion and iron transport. GAPDH expression is increased by insulin, hypoxia-inducible factor-1 (HIF-1), p53, and nitric oxide (NO) and decreased by acetylated histones. Aberrant mRNA and protein levels of GAPDH have been found in tumor biopsies from patients with a variety of cancers, including lung, renal cell, colorectal, or breast cancer. Cayman's GAPDH (human, recombinant) protein consists of 346 amino acids and has a calculated molecular weight of 38 kDa.

Caution
Our products are for laboratory research use only: Not for administration to humans!
Product Citations
Information about the product reference will follow. more
Close menu
Certificate of Analysis
You will get a certificate here
Go back
Log in or register to request a certificate of analysis.
Reviews 0
Read, write and discuss reviews... more
Close menu
Customer review for "GAPDH (human, recombinant)"
Write a review
Log in or register to review a product.
Viewed
This website uses cookies, which are necessary for the technical operation of the website and are always set. Other cookies, which increase the usability of this website, serve for direct advertising or simplify interaction with other websites and social networks, will only be used with your consent. More information
Decline Accept all Configure