Active protein produced in the endosperm tissue of barley grain. This production system uses barley endosperm storage cell which is characterised by its biochemically inert environment and lack of endotoxins. The barley endosperm tissue has a very low protease activity in comparison to most other cellular organisms, resulting in the unique protein storage function of the seed, that can maintain the proteins, including recombinant proteins, intact for years. The recombinant product is Aminal and Serum-free and therefore void of any human or animal viral contaminants that could jeopardize your cell culture. The purified recombinant protein carries no pyrogenic or pro-inflammatory contaminants. The Endotoxin level is less than 0.005ng per µg of recombinant protein (0.05EU/µg). Recombinant human VEGF165 contains 165 amino acids and a 16 a.a. histidine-based tag for a total length of 181 a.a. and has a predicted molecular mass of 20.9 kDa. As a result of glycosylation, the recombinant protein migrates with an apparent molecular mass of 30 kDa in SDS-PAGE.

Caution
Our products are for laboratory research use only: Not for administration to humans!
Certificate of Analysis
You will get a certificate here
Go back
Log in or register to request a certificate of analysis.
Reviews 0
Read, write and discuss reviews... more
Close menu
Customer review for "Vascular Endothelial Growth Factor 165 (VEGF165), human recombinant, plant based, bio-clean (rHuVEGF"
Write a review
Log in or register to review a product.
Similar products
Similar products 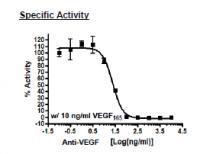 Vascular Endothelial Growth Factor-165 (VEGF165), active...
From 273.00€ *
Viewed
This website uses cookies, which are necessary for the technical operation of the website and are always set. Other cookies, which increase the usability of this website, serve for direct advertising or simplify interaction with other websites and social networks, will only be used with your consent. More information
Decline Accept all Configure