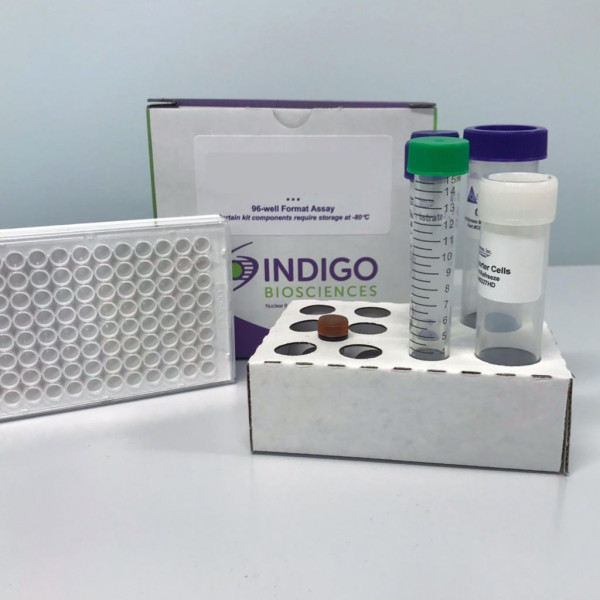 You can also order using info@biomol.com or FAX at 0049-40-85326022
Bigger quantity required? Request Bulk
Description Certificate of Analysis Reviews 0
Description
This human RAR-related orphan receptor gamma (RORgamma) mRNA is expressed from the RORC gene in... more
Close menu
Product information "RORgamma (human) Reporter Assay Kit"
This human RAR-related orphan receptor gamma (RORgamma) mRNA is expressed from the RORC gene in two forms via alternate usage of tissue-specific promoters. Variant 1 mRNA is expressed in numerous tissues, and encodes receptor isoform 1, referred to as RORgamma. Variant 2 mRNA comprises an alternate exon 1 that replaces the exon 1 and 2 sequences found in the Variant 1 transcript. Consequently, variant 2 mRNA presents a unique 5'UTR and modified N-terminal ORF sequences, resulting in the expression of a shorter isoform 2 receptor. The isoform 2 receptor is expressed predominantly in specialized immune cells developing within the thymus, as such it is referred to as RORgammat. This nuclear receptor assay system utilizes proprietary human cells engineered to provide high-level expression of a hybrid form of the human RAR-related orphan receptor gamma. The N-terminal DNA binding domains (DBD) of the native RORgamma and RORgammat receptors have been substituted with that of the yeast GAL4-DBD. Hence, the GAL4- RORgamma hybrid receptor expressed in these reporter cells will not discern any functional differences that may exist between the native isoform 1 and isoform 2 receptors. As is true in vivo, uncharacterized molecular activators present in these reporter cells maintain RORgamma in a constant state of high-level activity. The principal application of this reporter assay system is in the screening of test samples to quantify inverse-agonist activities that they may exert against human RORgamma. Reporter cells are prepared using INDIGO's proprietary CryoMite(TM) process. This cryopreservation method yields high cell viability post-thaw, and provides the convenience of immediately dispensing healthy, division-competent reporter cells into assay plates. There is no need for intermediate spin-and-wash steps, viability determinations, or cell titer adjustments.

Caution
Our products are for laboratory research use only: Not for administration to humans!
Certificate of Analysis
You will get a certificate here
Go back
Log in or register to request a certificate of analysis.
Reviews 0
Read, write and discuss reviews... more
Close menu
Customer review for "RORgamma (human) Reporter Assay Kit"
Write a review
Log in or register to review a product.
Viewed
This website uses cookies, which are necessary for the technical operation of the website and are always set. Other cookies, which increase the usability of this website, serve for direct advertising or simplify interaction with other websites and social networks, will only be used with your consent. More information
Decline Accept all Configure