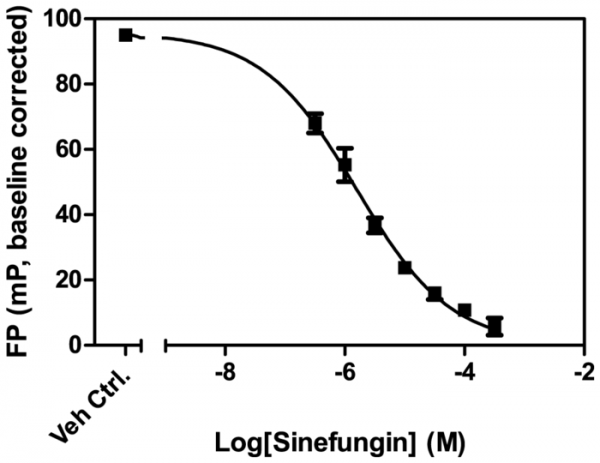 Get a free "Join the Resolution" T-Shirt with every Cayman purchase above 300 €.

You can also order using info@biomol.com or FAX at 0049-40-85326022
Bigger quantity required? Request Bulk
Description Certificate of Analysis Reviews 0
Description
Most histone lysine methyltransferases contain a conserved domain (SET) that utilizes... more
Close menu
Product information "GLP SAM-Screener(TM) Assay Kit"
Most histone lysine methyltransferases contain a conserved domain (SET) that utilizes S-adenosyl-L-methionine (SAM or AdoMet) as a co-factor to catalyze the methylation of the epsilon amino group of lysine. G9a-like protein (GLP) is a SET domain-containing methyltransferase that specifically mono- and di-methylates histone H3 at lysine 9 (H3K9). GLP and G9a function as major euchromatic H3K9me1 and H3K9me2 histone methyltransferases and also have been found to methylate several nonhistone substrates, including p53(K372). This fluorescence polarization assay is based upon a proprietary small molecule fluorescent probe* that binds to the SAM binding pocket in GLP. Binding of the small molecule probe to GLP induces an increase in fluorescence polarization. Binding of the probe can be competed with the endogenous cofactor SAM or by the inhibitor sinefungin, but is unaffected by the histone H3 peptide substrate. The GLP SAM-Screener(TM) Assay is robust (Z' >0.5) and exhibits a greater than 100 mP shift over a range of 0-250 nM GLP. The assay is suitable for high-throughput screening in the provided 384-well plate or can be scaled to higher density plate formats (e.g., 1,536-well) if desired. *United States Patent 9,120,820

EHMT1/GLP Chemiluminescent Assay Kit
942.00€ *
Viewed
This website uses cookies, which are necessary for the technical operation of the website and are always set. Other cookies, which increase the usability of this website, serve for direct advertising or simplify interaction with other websites and social networks, will only be used with your consent. More information
Decline Accept