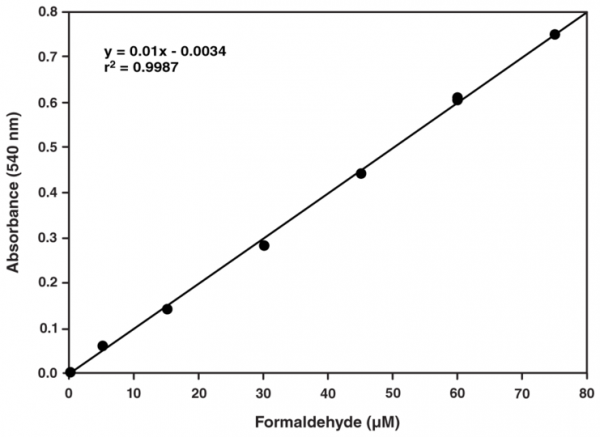 You can also order using info@biomol.com or FAX at 0049-40-85326022
Bigger quantity required? Request Bulk
Description Certificate of Analysis Reviews 0
Description
Catalase (EC 1.11.1.6, 2H2O2 oxidoreductase) is an ubiquitous antioxidant enzyme that is present... more
Close menu
Product information "Catalase Assay Kit"
Catalase (EC 1.11.1.6, 2H2O2 oxidoreductase) is an ubiquitous antioxidant enzyme that is present in most aerobic cells. Catalase (CAT) is involved in the detoxification of hydrogen peroxide (H2O2), a reactive oxygen species (ROS), which is a toxic product of both normal aerobic metabolism and pathogenic ROS production. This enzyme catalyzes the conversion of two molecules of H2O2 to molecular oxygen and two molecules of water (catalytic activity). CAT also demonstrates peroxidatic activity, in which low molecular weight alcohols can serve as electron donors. While the aliphatic alcohols serve as specific substrates for CAT, other enzymes with peroxidatic activity do not utilize these substrates. In humans, the highest levels of catalase are found in liver, kidney, and erythrocytes, where it is believed to account for the majority of hydrogen peroxide decomposition. The Cayman Chemical Catalase Assay Kit utilizes the peroxidatic function of CAT for determination of enzyme activity. The method is based on the reaction of the enzyme with methanol in the presence of an optimal concentration of H2O2. The formaldehyde produced is measured spectrophotometrically with 4-amino-3-hydrazino-5-mercapto-1,2,4-triazole (Purpald) as the chromogen. Purpald specifically forms a bicyclic heterocycle with aldehydes, which upon oxidation changes from colorless to a purple color. The assay can be used to measure CAT activity in plasma, serum, erythrocyte lysates, tissue homogenates, and cell lysates.

Caution
Our products are for laboratory research use only: Not for administration to humans!
Certificate of Analysis
You will get a certificate here
Go back
Log in or register to request a certificate of analysis.
Reviews 0
Read, write and discuss reviews... more
Close menu
Customer review for "Catalase Assay Kit"
Write a review
Log in or register to review a product.
Similar products
Similar products

Catalase Assay Kit (without Hydrogen Peroxide)
From 338.00€ *
Viewed
This website uses cookies, which are necessary for the technical operation of the website and are always set. Other cookies, which increase the usability of this website, serve for direct advertising or simplify interaction with other websites and social networks, will only be used with your consent. More information
Decline Accept all Configure