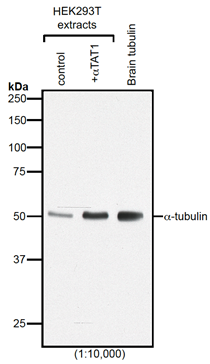 You can also order using info@biomol.com or FAX at 0049-40-85326022
Bigger quantity required? Request Bulk
Description Certificate of Analysis Reviews 0
Description
Detects K40 acetylation of alpha-tubulin, signal specifically increased by modification with... more
Close menu
Product information "Anti-acetyl-alpha-Tubulin, clone TEU318"
Detects K40 acetylation of alpha-tubulin, signal specifically increased by modification with tubulin acetyl transferase alpha-TAT1. Microtubules are key elements of the eukaryotic cytoskeleton that dynamically assemble from heterodimers of alpha- and beta-tubulin. Two different mechanisms can generate microtubule diversity: the expression of different alpha- and beta-tubulin genes, referred to as tubulin isotypes, and the generation of posttranslational modifications (PTMs) on alpha- and beta-tubulin. Tubulin PTMs include the well-known acetylation or phosphorylation, and others that have so far mostly been found on tubulin, detyrosination/tyrosination, polyglutamylation and polyglycylation. These PTMs might have evolved to specifically regulate tubulin and microtubule functions. Tubulin acetylation was discovered on K40 of flagellar alpha-tubulin in Chlamydomonas reinhardtii and is generally enriched on stable microtubules in cells. It is located on the microtubule lumenal surface. As a result of its localization at the inner face of microtubules, K40 acetylation might rather affect the binding of microtubule inner proteins, a poorly characterized family of proteins. Functional experiments in cells have further suggested that K40 acetylation regulates intracellular transport by regulating the traffic of kinesin motors probably by indirect mechanisms. Acetyltransferase alpha-Tat1 (or Mec-17) specifically acetylate alpha-tubulin K40. Acetylation of tubulin by alpha-Tat1 accumulates selectively in stable, long-lived microtubules thus explaining the link between this posttranslational modication and stable microtubules in cells. However, the direct cellular function of K40 acetylation on microtubules is still unclear.

Caution
Our products are for laboratory research use only: Not for administration to humans!
Certificate of Analysis
You will get a certificate here
Go back
Log in or register to request a certificate of analysis.
Reviews 0
Read, write and discuss reviews... more
Close menu
Customer review for "Anti-acetyl-alpha-Tubulin, clone TEU318"
Write a review
Log in or register to review a product.
Viewed
This website uses cookies, which are necessary for the technical operation of the website and are always set. Other cookies, which increase the usability of this website, serve for direct advertising or simplify interaction with other websites and social networks, will only be used with your consent. More information
Decline Accept all Configure