You can also order using info@biomol.com or FAX at 0049-40-85326022
Bigger quantity required? Request Bulk
Description Certificate of Analysis Reviews 0
Description
Protein function: Recruited and tyrosine phosphorylated by several receptor systems, for example... more
Close menu
Product information "SAM68 Antibody AbVantage(TM) Pack"
Protein function: Recruited and tyrosine phosphorylated by several receptor systems, for example the T-cell, leptin and insulin receptors. Once phosphorylated, functions as an adapter protein in signal transduction cascades by binding to SH2 and SH3 domain- containing proteins. Role in G2-M progression in the cell cycle. Represses CBP-dependent transcriptional activation apparently by competing with other nuclear factors for binding to CBP. Also acts as a putative regulator of mRNA stability and/or translation rates and mediates mRNA nuclear export. Positively regulates the association of constitutive transport element (CTE)-containing mRNA with large polyribosomes and translation initiation. According to some authors, is not involved in the nucleocytoplasmic export of unspliced (CTE)-containing RNA species according to (PubMed:22253824). RNA-binding protein that plays a role in the regulation of alternative splicing and influences mRNA splice site selection and exon inclusion. Binds to RNA containing 5'-[AU]UAA-3' as a bipartite motif spaced by more than 15 nucleotides. Binds poly(A). Can regulate CD44 alternative splicing in a Ras pathway-dependent manner. In cooperation with HNRNPA1 modulates alternative splicing of BCL2L1 by promoting splicing toward isoform Bcl-X(S), and of SMN1 (PubMed:17371836, PubMed:20186123). Can regulate alternative splicing of NRXN1 and NRXN3 in the laminin G-like domain 6 containing the evolutionary conserved neurexin alternative spliced segment 4 (AS4) involved in neurexin selective targeting to postsynaptic partners. In a neuronal activity-dependent manner cooperates synergistically with KHDRBS2/SLIM-1 in regulation of NRXN1 exon skipping at AS4. The cooperation with KHDRBS2/SLIM-1 is antagonistic for regulation of NXRN3 alternative splicing at AS4. [The UniProt Consortium]

Caution
Our products are for laboratory research use only: Not for administration to humans!
Certificate of Analysis
You will get a certificate here
Go back
Log in or register to request a certificate of analysis.
Reviews 0
Read, write and discuss reviews... more
Close menu
Customer review for "SAM68 Antibody AbVantage(TM) Pack"
Write a review
Log in or register to review a product.
Similar products
Similar products 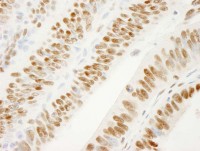 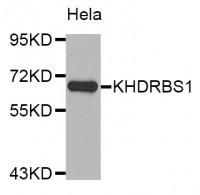 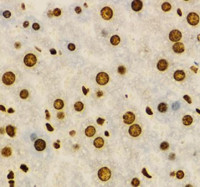 Anti-Sam 68 ( KH Domain-Containing, RNA-Binding, Signal...
From 396.00€ *
Viewed
This website uses cookies, which are necessary for the technical operation of the website and are always set. Other cookies, which increase the usability of this website, serve for direct advertising or simplify interaction with other websites and social networks, will only be used with your consent. More information
Decline Accept all Configure