You can also order using info@biomol.com or FAX at 0049-40-85326022
Bigger quantity required? Request Bulk
Description Certificate of Analysis Reviews 0
Description
Protein function: Required for kinetochore function and chromosome segregation in mitosis.... more
Close menu
Product information "CENP-F/Mitosin Antibody AbVantage(TM) Pack"
Protein function: Required for kinetochore function and chromosome segregation in mitosis. Required for kinetochore localization of dynein, LIS1, NDE1 and NDEL1. Regulates recycling of the plasma membrane by acting as a link between recycling vesicles and the microtubule network though its association with STX4 and SNAP25. Acts as a potential inhibitor of pocket protein-mediated cellular processes during development by regulating the activity of RB proteins during cell division and proliferation. May play a regulatory or permissive role in the normal embryonic cardiomyocyte cell cycle and in promoting continued mitosis in transformed, abnormally dividing neonatal cardiomyocytes. Interaction with RB directs embryonic stem cells toward a cardiac lineage. Involved in the regulation of DNA synthesis and hence cell cycle progression, via its C-terminus. Has a potential role regulating skeletal myogenesis and in cell differentiation in embryogenesis. Involved in dendritic cell regulation of T-cell immunity against chlamydia. [The UniProt Consortium]

Caution
Our products are for laboratory research use only: Not for administration to humans!
Certificate of Analysis
You will get a certificate here
Go back
Log in or register to request a certificate of analysis.
Reviews 0
Read, write and discuss reviews... more
Close menu
Customer review for "CENP-F/Mitosin Antibody AbVantage(TM) Pack"
Write a review
Log in or register to review a product.
Similar products
Similar products 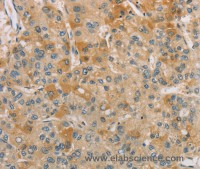 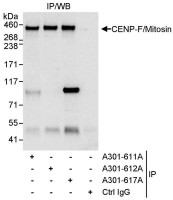 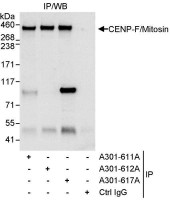 Anti-CENP-F/Mitosin (IHC)
From 125.00€ *
Viewed
This website uses cookies, which are necessary for the technical operation of the website and are always set. Other cookies, which increase the usability of this website, serve for direct advertising or simplify interaction with other websites and social networks, will only be used with your consent. More information
Decline Accept