You can also order using info@biomol.com or FAX at 0049-40-85326022
Bigger quantity required? Request Bulk
Description Certificate of Analysis Reviews 0
Description
0.2 mg/ml with 0.1 mg/ml BSA (US sourced), 0.05% sodium azide. Recognizes a protein of ~55kDa,... more
Close menu
Product information "Anti-SOX10, clone SOX10/992"
0.2 mg/ml with 0.1 mg/ml BSA (US sourced), 0.05% sodium azide. Recognizes a protein of ~55kDa, identified as SOX10. This mAb is highly specific and does not cross-react with other members of the SOX-family. SOX genes comprise a family of genes that are related to the mammalian sex-determining gene SRY. These genes similarly contain sequences that encode for the HMG-box domain, which is responsible for the sequence-specific DNA-binding activity. SOX-10 is a sensitive marker of melanoma, including conventional, spindled, and desmoplastic subtypes. It is expressed by metastatic melanomas and nodal capsular nevus in sentinel lymph nodes, but not by other lymph node components such as dendritic cells, which usually express S100 protein. Commonly used melanoma markers, such as anti-HMB-45 and anti-Melan-A, are poorly expressed in desmoplastic melanomas while SOX-10 is moderately to strongly expressed in desmoplastic melanomas. SOX-10 is considered as a very reliable marker for recognizing residual desmoplastic melanomas. In normal tissues, it is expressed in Schwann cells, melanocytes, and myoepithelial cells of salivary, bronchial and mammary glands. SOX-10 expression is also observed in mast cells. Protein function: Transcription factor that seems to function synergistically with the POU domain protein TST-1/OCT6/SCIP. Could confer cell specificity to the function of other transcription factors in developing and mature glia. [The UniProt Consortium] 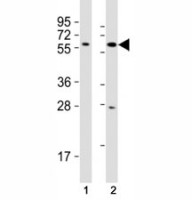 Anti-SOX10, clone SOX10/2311R
541.00€ *
Viewed
This website uses cookies, which are necessary for the technical operation of the website and are always set. Other cookies, which increase the usability of this website, serve for direct advertising or simplify interaction with other websites and social networks, will only be used with your consent. More information
Decline Accept all Configure