You can also order using info@biomol.com or FAX at 0049-40-85326022
Bigger quantity required? Request Bulk
Description Certificate of Analysis Reviews 0
Description
SFTPB is the pulmonary-associated surfactant protein B (SPB), an amphipathic surfactant protein... more
Close menu
Product information "Anti-SFTPB, ID (SFTPB, SFTP3, Pulmonary surfactant-associated protein B, 18kD pulmonary-surfactant p"
SFTPB is the pulmonary-associated surfactant protein B (SPB), an amphipathic surfactant protein essential for lung function and homeostasis after birth. Pulmonary surfactant is a surface-active lipoprotein complex composed of 90% lipids and 10% proteins which include plasma proteins and apolipoproteins SPA, SPB, SPC and SPD. The surfactant is secreted by the alveolar cells of the lung and maintains the stability of pulmonary tissue by reducing the surface tension of fluids that coat the lung. The SPB enhances the rate of spreading and increases the stability of surfactant monolayers in vitro. Multiple mutations in this gene have been identified, which cause pulmonary surfactant metabolism dysfunction type 1, also called pulmonary alveolar proteinosis due to surfactant protein B deficiency, and are associated with fatal respiratory distress in the neonatal period. Alternatively spliced transcript variants encoding the same protein have been identified. Applications: Suitable for use in Western Blot and ELISA. Other applications have not been tested. , Recommended Dilution: Western Blot: 1:1000, Optimal dilutions to be determined by the researcher. Storage and Stability: May be stored at 4°C for short-term only. Aliquot to avoid repeated freezing and thawing. Store at -20°C. Aliquots are stable for 12 months after receipt. For maximum recovery of product, centrifuge the original vial after thawing and prior to removing the cap.

Caution
Our products are for laboratory research use only: Not for administration to humans!
Certificate of Analysis
You will get a certificate here
Go back
Log in or register to request a certificate of analysis.
Reviews 0
Read, write and discuss reviews... more
Close menu
Customer review for "Anti-SFTPB, ID (SFTPB, SFTP3, Pulmonary surfactant-associated protein B, 18kD pulmonary-surfactant p"
Write a review
Log in or register to review a product.
Similar products
Similar products 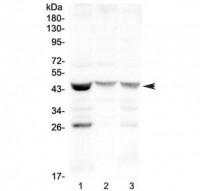 Anti-SP-B (Pulmonary surfactant-Associated Protein B,...
From 396.00€ *
Viewed
This website uses cookies, which are necessary for the technical operation of the website and are always set. Other cookies, which increase the usability of this website, serve for direct advertising or simplify interaction with other websites and social networks, will only be used with your consent. More information
Decline Accept all Configure