You can also order using info@biomol.com or FAX at 0049-40-85326022
Bigger quantity required? Request Bulk
Description Certificate of Analysis Reviews 0
Description
1 mg/ml in 1X PBS, BSA free, sodium azide free. S100 belongs to the family of calcium binding... more
Close menu
Product information "Anti-S100B, clone S100B/1706R (recombinant antibody)"
1 mg/ml in 1X PBS, BSA free, sodium azide free. S100 belongs to the family of calcium binding proteins. S100A and S100B proteins are two members of the S100 family. S100A is composed of an alpha and a beta chain whereas S100B is composed of two beta chains. This antibody is specific against an epitope located on the beta-chain (i.e. in S-100A and S-100B) but not on the alpha-chain of S-100 (i.e. in S-100A and S100A0). This antibody can be used to localize S-100A and S-100B in various tissue sections. S-100 protein has been found in normal melanocytes, Langerhans cells, histiocytes, chondrocytes, lipocytes, skeletal and cardiac muscle, Schwann cells, epithelial and myoepithelial cells of the breast, salivary and sweat glands, as well as in glial cells. Neoplasms derived from these cells also express S-100 protein, albeit non-uniformly. A large number of well-differentiated tumors of the salivary gland, adipose and cartilaginous tissue, and Schwann cell-derived tumors express S-100 protein. Almost all malignant melanomas and cases of histiocytosis X are positive for S-100 protein. Protein function: Weakly binds calcium but binds zinc very tightly- distinct binding sites with different affinities exist for both ions on each monomer. Physiological concentrations of potassium ion antagonize the binding of both divalent cations, especially affecting high-affinity calcium-binding sites. Binds to and initiates the activation of STK38 by releasing autoinhibitory intramolecular interactions within the kinase. Interaction with AGER after myocardial infarction may play a role in myocyte apoptosis by activating ERK1/2 and p53/TP53 signaling. Could assist ATAD3A cytoplasmic processing, preventing aggregation and favoring mitochondrial localization. May mediate calcium-dependent regulation on many physiological processes by interacting with other proteins, such as TPR-containing proteins, and modulating their activity. [The UniProt Consortium]

Caution
Our products are for laboratory research use only: Not for administration to humans!
Certificate of Analysis
You will get a certificate here
Go back
Log in or register to request a certificate of analysis.
Reviews 0
Read, write and discuss reviews... more
Close menu
Customer review for "Anti-S100B, clone S100B/1706R (recombinant antibody)"
Write a review
Log in or register to review a product.
Similar products
Similar products 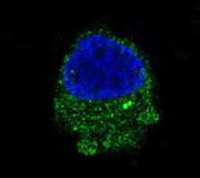 Anti-S100B, clone PS1B1-2R
From 251.00€ *
Viewed
This website uses cookies, which are necessary for the technical operation of the website and are always set. Other cookies, which increase the usability of this website, serve for direct advertising or simplify interaction with other websites and social networks, will only be used with your consent. More information
Decline Accept all Configure