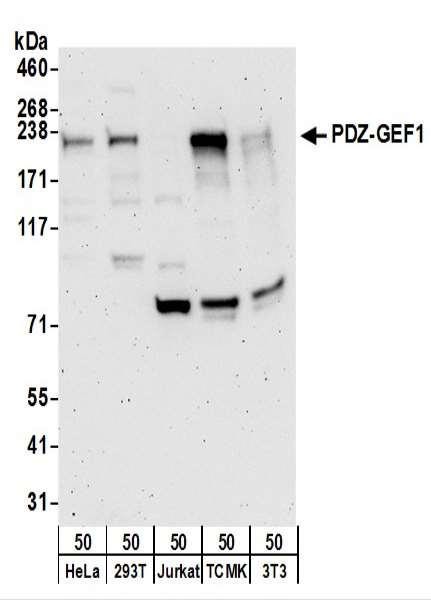 You can also order using info@biomol.com or FAX at 0049-40-85326022
Bigger quantity required? Request Bulk
Description Product Citations Certificate of Analysis Reviews 0
Description
Protein function: Functions as a guanine nucleotide exchange factor (GEF), which activates Rap... more
Close menu
Product information "Anti-PDZ-GEF1"
Protein function: Functions as a guanine nucleotide exchange factor (GEF), which activates Rap and Ras family of small GTPases by exchanging bound GDP for free GTP in a cAMP-dependent manner. Serves as a link between cell surface receptors and Rap/Ras GTPases in intracellular signaling cascades. Acts also as an effector for Rap1 by direct association with Rap1-GTP thereby leading to the amplification of Rap1-mediated signaling. Shows weak activity on HRAS. It is controversial whether RAPGEF2 binds cAMP and cGMP (PubMed:23800469, PubMed:10801446) or not (PubMed:10608844, PubMed:10548487, PubMed:11359771). Its binding to ligand-activated beta-1 adrenergic receptor ADRB1 leads to the Ras activation through the G(s)-alpha signaling pathway. Involved in the cAMP- induced Ras and Erk1/2 signaling pathway that leads to sustained inhibition of long term melanogenesis by reducing dendrite extension and melanin synthesis. Provides also inhibitory signals for cell proliferation of melanoma cells and promotes their apoptosis in a cAMP-independent nanner. Regulates cAMP-induced neuritogenesis by mediating the Rap1/B-Raf/ERK signaling through a pathway that is independent on both PKA and RAPGEF3/RAPGEF4. Involved in neuron migration and in the formation of the major forebrain fiber connections forming the corpus callosum, the anterior commissure and the hippocampal commissure during brain development. Involved in neuronal growth factor (NGF)-induced sustained activation of Rap1 at late endosomes and in brain- derived neurotrophic factor (BDNF)-induced axon outgrowth of hippocampal neurons. Plays a role in the regulation of embryonic blood vessel formation and in the establishment of basal junction integrity and endothelial barrier function. May be involved in the regulation of the vascular endothelial growth factor receptor KDR and cadherin CDH5 expression at allantois endothelial cell-cell junctions. [The UniProt Consortium]

Caution
Our products are for laboratory research use only: Not for administration to humans!
Product Citations
Information about the product reference will follow. more
Close menu
Certificate of Analysis
You will get a certificate here
Go back
Log in or register to request a certificate of analysis.
Reviews 0
Read, write and discuss reviews... more
Close menu
Customer review for "Anti-PDZ-GEF1"
Write a review
Log in or register to review a product.
Similar products
Similar products 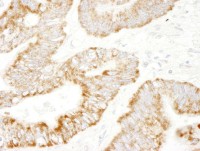 Anti-PDZ-GEF1 (IHC)
From 131.00€ *
Viewed
This website uses cookies, which are necessary for the technical operation of the website and are always set. Other cookies, which increase the usability of this website, serve for direct advertising or simplify interaction with other websites and social networks, will only be used with your consent. More information
Decline Accept all Configure