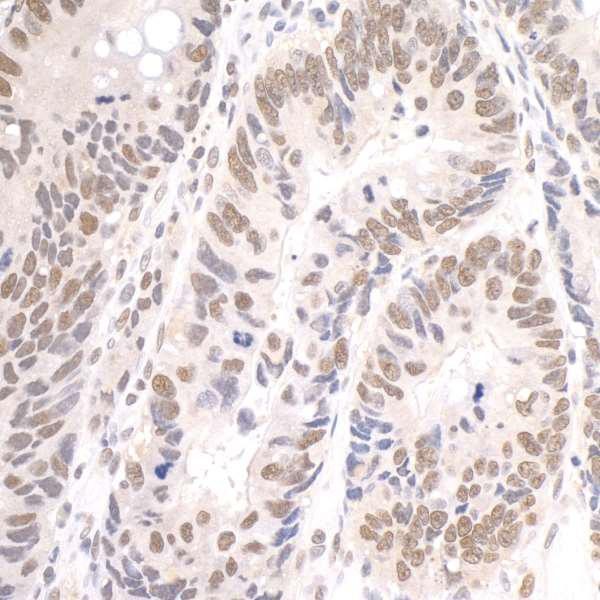 You can also order using info@biomol.com or FAX at 0049-40-85326022
Bigger quantity required? Request Bulk
Description Product Citations Certificate of Analysis Reviews 0
Description
Protein function: Component of the PAF1 complex (PAF1C) which has multiple functions during... more
Close menu
Product information "Anti-Paf1 (IHC)"
Protein function: Component of the PAF1 complex (PAF1C) which has multiple functions during transcription by RNA polymerase II and is implicated in regulation of development and maintenance of embryonic stem cell pluripotency. PAF1C associates with RNA polymerase II through interaction with POLR2A CTD non- phosphorylated and 'Ser-2'- and 'Ser-5'-phosphorylated forms and is involved in transcriptional elongation, acting both indepentently and synergistically with TCEA1 and in cooperation with the DSIF complex and HTATSF1. PAF1C is required for transcription of Hox and Wnt target genes. PAF1C is involved in hematopoiesis and stimulates transcriptional activity of KMT2A/MLL1, it promotes leukemogenesis through association with KMT2A/MLL1-rearranged oncoproteins, such as KMT2A/MLL1-MLLT3/AF9 and KMT2A/MLL1-MLLT1/ENL. PAF1C is involved in histone modifications such as ubiquitination of histone H2B and methylation on histone H3 'Lys-4' (H3K4me3). PAF1C recruits the RNF20/40 E3 ubiquitin-protein ligase complex and the E2 enzyme UBE2A or UBE2B to chromatin which mediate monoubiquitination of 'Lys-120' of histone H2B (H2BK120ub1), UB2A/B-mediated H2B ubiquitination is proposed to be coupled to transcription. PAF1C is involved in mRNA 3' end formation probably through association with cleavage and poly(A) factors. In case of infection by influenza A strain H3N2, PAF1C associates with viral NS1 protein, thereby regulating gene transcription. Connects PAF1C with the RNF20/40 E3 ubiquitin-protein ligase complex. Involved in polyadenylation of mRNA precursors. Has oncogenic activity in vivo and in vitro. [The UniProt Consortium]

Caution
Our products are for laboratory research use only: Not for administration to humans!
Product Citations
Information about the product reference will follow. more
Close menu
Certificate of Analysis
You will get a certificate here
Go back
Log in or register to request a certificate of analysis.
Reviews 0
Read, write and discuss reviews... more
Close menu
Customer review for "Anti-Paf1 (IHC)"
Write a review
Log in or register to review a product.
Similar products
Similar products

Anti-PAF1, CT (PAF1, PD2, RNA polymerase II-associated...
721.00€ *
Viewed
This website uses cookies, which are necessary for the technical operation of the website and are always set. Other cookies, which increase the usability of this website, serve for direct advertising or simplify interaction with other websites and social networks, will only be used with your consent. More information
Decline Accept all Configure