You can also order using info@biomol.com or FAX at 0049-40-85326022
Bigger quantity required? Request Bulk
Description Product Citations Certificate of Analysis Reviews 0
Description
Glyceraldehyde-3-phosphate dehydrogenase (GAPDH) is well known as one of the key enzymes involved... more
Close menu
Product information "Anti-Mouse Monoclonal Antibody to GAPDH (Clone: 3B1E9)"
Glyceraldehyde-3-phosphate dehydrogenase (GAPDH) is well known as one of the key enzymes involved in glycolysis. It catalyzes an important energy-yielding step in carbohydrate metabolism, the reversible oxidative phosphorylation of glyceraldehyde-3-phosphate in the presence of inorganic phosphate and nicotinamide adenine dinucleotide (NAD). The enzyme exists as a tetramer of identical chains. Besides its functioning as a glycolytic enzyme in cytoplasm, recent evidence suggest that mammalian GAPDH is also involved in a great number of intracellular proceses such as membrane fusion, microtubule bundling, phosphotransferase activity, nuclear RNA export, DNA replication, and DNA repair. During the last decade a lot of findings appeared concerning the role of GAPDH in different pathologies including prostate cancer progression, programmed neuronal cell death, age-related neuronal diseases, such as Alzheimers and Huntingtons disease. GAPDH Antibody, mAb, Mouse is produced from the hybridoma resulting from fusion of Sp2/0 myeloma and lymphocytes obtained from mouse immunized with human GAPDH protein from erythrocytes. Protein function: Has both glyceraldehyde-3-phosphate dehydrogenase and nitrosylase activities, thereby playing a role in glycolysis and nuclear functions, respectively. Participates in nuclear events including transcription, RNA transport, DNA replication and apoptosis. Nuclear functions are probably due to the nitrosylase activity that mediates cysteine S-nitrosylation of nuclear target proteins such as SIRT1, HDAC2 and PRKDC. Modulates the organization and assembly of the cytoskeleton. Facilitates the CHP1-dependent microtubule and membrane associations through its ability to stimulate the binding of CHP1 to microtubules. Glyceraldehyde-3-phosphate dehydrogenase is a key enzyme in glycolysis that catalyzes the first step of the pathway by converting D-glyceraldehyde 3-phosphate (G3P) into 3-phospho-D- glyceroyl phosphate. Component of the GAIT (gamma interferon- activated inhibitor of translation) complex which mediates interferon-gamma-induced transcript-selective translation inhibition in inflammation processes. Upon interferon-gamma treatment assembles into the GAIT complex which binds to stem loop-containing GAIT elements in the 3'-UTR of diverse inflammatory mRNAs (such as ceruplasmin) and suppresses their translation. [The UniProt Consortium]

Caution
Our products are for laboratory research use only: Not for administration to humans!
Product Citations
Information about the product reference will follow. more
Close menu
Certificate of Analysis
You will get a certificate here
Go back
Log in or register to request a certificate of analysis.
Reviews 0
Read, write and discuss reviews... more
Close menu
Customer review for "Anti-Mouse Monoclonal Antibody to GAPDH (Clone: 3B1E9)"
Write a review
Log in or register to review a product.
Similar products
Similar products 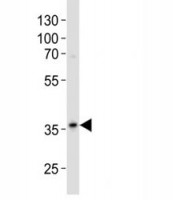 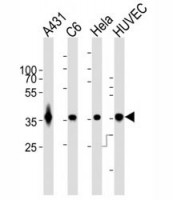 Anti-GAPDH
From 63.00€ *
Viewed
This website uses cookies, which are necessary for the technical operation of the website and are always set. Other cookies, which increase the usability of this website, serve for direct advertising or simplify interaction with other websites and social networks, will only be used with your consent. More information
Decline Accept all Configure