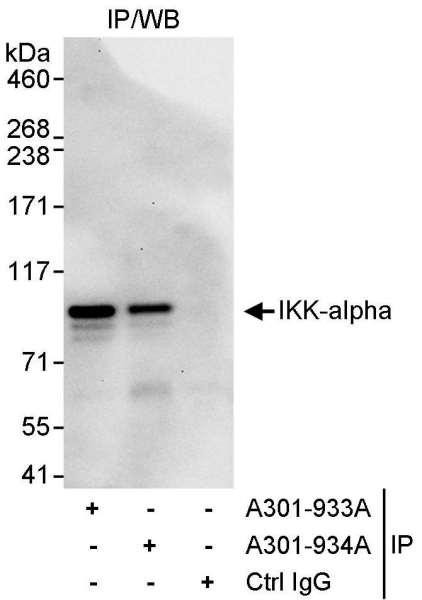 You can also order using info@biomol.com or FAX at 0049-40-85326022
Bigger quantity required? Request Bulk
Description Product Citations Certificate of Analysis Reviews 0
Description
Protein function: Serine kinase that plays an essential role in the NF- kappa-B signaling pathway... more
Close menu
Product information "Anti-IKK-alpha"
Protein function: Serine kinase that plays an essential role in the NF- kappa-B signaling pathway which is activated by multiple stimuli such as inflammatory cytokines, bacterial or viral products, DNA damages or other cellular stresses. Acts as part of the canonical IKK complex in the conventional pathway of NF-kappa-B activation and phosphorylates inhibitors of NF-kappa-B on serine residues. These modifications allow polyubiquitination of the inhibitors and subsequent degradation by the proteasome. In turn, free NF-kappa-B is translocated into the nucleus and activates the transcription of hundreds of genes involved in immune response, growth control, or protection against apoptosis. Negatively regulates the pathway by phosphorylating the scaffold protein TAXBP1 and thus promoting the assembly of the A20/TNFAIP3 ubiquitin-editing complex (composed of A20/TNFAIP3, TAX1BP1, and the E3 ligases ITCH and RNF11). Therefore, CHUK plays a key role in the negative feedback of NF-kappa-B canonical signaling to limit inflammatory gene activation. As part of the non-canonical pathway of NF-kappa-B activation, the MAP3K14-activated CHUK/IKKA homodimer phosphorylates NFKB2/p100 associated with RelB, inducing its proteolytic processing to NFKB2/p52 and the formation of NF-kappa- B RelB-p52 complexes. In turn, these complexes regulate genes encoding molecules involved in B-cell survival and lymphoid organogenesis. Participates also in the negative feedback of the non-canonical NF-kappa-B signaling pathway by phosphorylating and destabilizing MAP3K14/NIK. Within the nucleus, phosphorylates CREBBP and consequently increases both its transcriptional and histone acetyltransferase activities. Modulates chromatin accessibility at NF-kappa-B-responsive promoters by phosphorylating histones H3 at 'Ser-10' that are subsequently acetylated at 'Lys-14' by CREBBP. Additionally, phosphorylates the CREBBP-interacting protein NCOA3. Also phosphorylates FOXO3 and may regulate this pro-apoptotic transcription factor (PubMed:15084260). [The UniProt Consortium]

Caution
Our products are for laboratory research use only: Not for administration to humans!
Product Citations
Information about the product reference will follow. more
Close menu
Certificate of Analysis
You will get a certificate here
Go back
Log in or register to request a certificate of analysis.
Reviews 0
Read, write and discuss reviews... more
Close menu
Customer review for "Anti-IKK-alpha"
Write a review
Log in or register to review a product.
Similar products
Similar products

Anti-phospho-IKK alpha/beta (Ser176/180) Antibody Sampler...
636.00€ *
Viewed
This website uses cookies, which are necessary for the technical operation of the website and are always set. Other cookies, which increase the usability of this website, serve for direct advertising or simplify interaction with other websites and social networks, will only be used with your consent. More information
Decline Accept all Configure