You can also order using info@biomol.com or FAX at 0049-40-85326022
Bigger quantity required? Request Bulk
Description Product Citations Certificate of Analysis Reviews 0
Description
EPHA5 belongs to the ephrin receptor subfamily of the protein-tyrosine kinase family. EPH and... more
Close menu
Product information "Anti-EPHA5 (Ephrin Type-A Receptor 5, Tyrosine-protein Kinase Receptor EHK-1, Eph Homology Kinase-1,"
EPHA5 belongs to the ephrin receptor subfamily of the protein-tyrosine kinase family. EPH and EPH-related receptors have been implicated in mediating developmental events, particularly in the nervous system. Receptors in the EPH subfamily typically have a single kinase domain and an extracellular region containing a Cys-rich domain and 2 fibronectin type III repeats. The ephrin receptors are divided into 2 groups based on the similarity of their extracellular domain sequences and their affinities for binding ephrin-A and ephrin-B ligands Protein kinases are enzymes that transfer a phosphate group from a phosphate donor, generally the g phosphate of ATP, onto an acceptor amino acid in a substrate protein. By this basic mechanism, protein kinases mediate most of the signal transduction in eukaryotic cells, regulating cellular metabolism, transcription, cell cycle progression, cytoskeletal rearrangement and cell movement, apoptosis, and differentiation. With more than 500 gene products, the protein kinase family is one of the largest families of proteins in eukaryotes. The family has been classified in 8 major groups based on sequence comparison of their tyrosine (PTK) or serine/threonine (STK) kinase catalytic domains. The tyrosine kinase (TK) group is mainly involved in the regulation of cell-cell interactions such as differentiation, adhesion, motility and death. There are currently about 90 TK genes sequenced, 58 are of receptor protein TK (e.g. EGFR, EPH, FGFR, PDGFR, TRK, and VEGFR families), and 32 of cytosolic TK (e.g. ABL, FAK, JAK, and SRC families). Applications: Suitable for use in ELISA, Western Blot, and Immunohistochemistry. Other applications not tested. Recommended Dilution: ELISA: 1:4,000, Western Blot: 1:2,000, Optimal dilutions to be determined by the researcher. Storage and Stability: May be stored at 4°C for short-term only. Do not freeze alkaline phosphatase conjugates which could result in a substantial loss of enzymatic activity. Light sensitive. Aliquots are stable for at least 6 months. For maximum recovery of product, centrifuge the original vial after thawing and prior to removing the cap., , Note: Applications are based on unconjugated antibody.

Caution
Our products are for laboratory research use only: Not for administration to humans!
Product Citations
Information about the product reference will follow. more
Close menu
Certificate of Analysis
You will get a certificate here
Go back
Log in or register to request a certificate of analysis.
Reviews 0
Read, write and discuss reviews... more
Close menu
Customer review for "Anti-EPHA5 (Ephrin Type-A Receptor 5, Tyrosine-protein Kinase Receptor EHK-1, Eph Homology Kinase-1,"
Write a review
Log in or register to review a product.
Similar products
Similar products 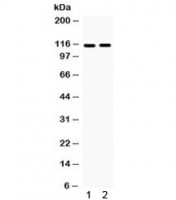 Anti-EphA5
505.00€ *
Viewed
This website uses cookies, which are necessary for the technical operation of the website and are always set. Other cookies, which increase the usability of this website, serve for direct advertising or simplify interaction with other websites and social networks, will only be used with your consent. More information
Decline Accept all Configure