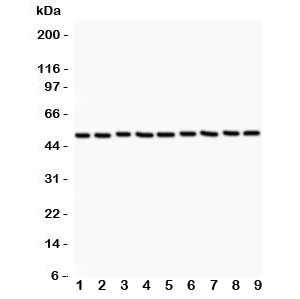 You can also order using info@biomol.com or FAX at 0049-40-85326022
Bigger quantity required? Request Bulk
Description Product Citations Certificate of Analysis Reviews 0
Description
0.5mg/ml if reconstituted with 0.2ml sterile DI water. CSK is a non-receptor protein tyrosine... more
Close menu
Product information "Anti-CSK"
0.5mg/ml if reconstituted with 0.2ml sterile DI water. CSK is a non-receptor protein tyrosine kinase protein that in humans is encoded by the CSK gene. It is mapped to 15q24.1. CSK suppresses activity of the Src family of protein kinases by phosphorylation of family members at a conserved C-terminal site in Src. CSKs control of the Src family activity is widely thought to be central to regulation of the immune response. It can downregulate tyrosine kinase activity of the Src oncoprotein through tyrosine phosphorylation of the carboxy terminus. Since cell transformation by Src oncoproteins is caused by various mechanisms that interfere with this phosphorylation, the gene might function as an antioncogene. Protein function: Non-receptor tyrosine-protein kinase that plays an important role in the regulation of cell growth, differentiation, migration and immune response. Phosphorylates tyrosine residues located in the C-terminal tails of Src-family kinases (SFKs) including LCK, SRC, HCK, FYN, LYN or YES1. Upon tail phosphorylation, Src-family members engage in intramolecular interactions between the phosphotyrosine tail and the SH2 domain that result in an inactive conformation. To inhibit SFKs, CSK is recruited to the plasma membrane via binding to transmembrane proteins or adapter proteins located near the plasma membrane. Suppresses signaling by various surface receptors, including T- cell receptor (TCR) and B-cell receptor (BCR) by phosphorylating and maintaining inactive several positive effectors such as FYN or LCK. [The UniProt Consortium]

Caution
Our products are for laboratory research use only: Not for administration to humans!
Product Citations
Information about the product reference will follow. more
Close menu
Certificate of Analysis
You will get a certificate here
Go back
Log in or register to request a certificate of analysis.
Reviews 0
Read, write and discuss reviews... more
Close menu
Customer review for "Anti-CSK"
Write a review
Log in or register to review a product.
Similar products
Similar products 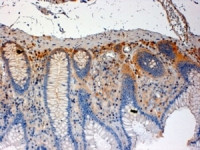 Anti-CSK
From 131.00€ *
Viewed
This website uses cookies, which are necessary for the technical operation of the website and are always set. Other cookies, which increase the usability of this website, serve for direct advertising or simplify interaction with other websites and social networks, will only be used with your consent. More information
Decline Accept all Configure