You can also order using info@biomol.com or FAX at 0049-40-85326022
Bigger quantity required? Request Bulk
Description Product Citations Certificate of Analysis Reviews 0
Description
Circadian rhythms govern many key physiological processes that fluctuate with a period of... more
Close menu
Product information "Anti-CLOCK (Circadian Locomoter Output Cycles Protein Kaput, hCLOCK, Class E Basic Helix-loop-helix"
Circadian rhythms govern many key physiological processes that fluctuate with a period of approximately 24 hours. These processes include the sleep-wake cycle, glucose, lipid and drug metabolism, heart rate, hormone secretion, renal blood flow, and body temperature, as well as, basic cellular processes such as DNA repair and the timing of the cell division cycle (1,2). The mammalian circadian system consists of many individual tissue-specific clocks (peripheral clocks) that are controlled by a master circadian pacemaker residing in the suprachiasmatic nuclei (SCN) of the brain (1,2). The periodic circadian rhythm is prominently manifested by the light-dark cycle, which is sensed by the visual system and processed by the SCN. The SCN processes the light-dark information and synchronizes peripheral clocks through neural and humoral output signals (1,2). The cellular circadian clockwork consists of interwoven positive and negative regulatory loops, or limbs (1,2). The positive limb includes the CLOCK and BMAL1 proteins, two basic helix-loop-helix-PAS containing transcription factors that bind E box enhancer elements and activate transcription of their target genes. CLOCK is a histone acetyltransferase, (HAT) protein, which acetylates both histone H3 and H4 (3). BMAL1 binds to CLOCK and enhances its HAT activity (3). The CLOCK/BMAL1 dimer exhibits a periodic oscillation in both nuclear/cytoplasmic localization and protein levels, both of which are regulated by phosphorylation (4,5). CLOCK/BMAL1 target genes include the Cry and Per genes,, whose proteins form the negative limb of the circadian clockwork system (1,2). CRY and PER proteins (CRY1, CRY2, PER1, PER2 and PER3) form oligomers that also periodically shuttle between the nucleus and cytoplasm. When in the nucleus, CRY/PER proteins inhibit CLOCK/BMAL1- mediated transcriptional activation, thus completing the circadian transcriptional loop (1,2). In tissues, roughly six to eight percent of all genes exhibit a circadian expression, pattern (1,2). This 24-hour periodicity in gene expression results from coordination of the positive and negative regulatory limbs of the cellular clockwork system, and is fine-tuned by outside signals received from the SCN. Applications: Suitable for use in Western Blot and Immunoprecipitation. Other applications not tested. Recommended Dilution: Western Blot: 1:1000 Incubate membrane with diluted antibody in 5% BSA, 1X TBS, 0.1% Tween-20 at 4°C with gentle shaking, overnight., Immunoprecipitation: 1:100, Optimal dilutions to be determined by the researcher. Storage and Stability: May be stored at 4°C for short-term only. Aliquot to avoid repeated freezing and thawing. Store at -20°C. Aliquots are stable for at least 12 months. For maximum recovery of product, centrifuge the original vial after thawing and prior to removing the cap.

Caution
Our products are for laboratory research use only: Not for administration to humans!
Product Citations
Information about the product reference will follow. more
Close menu
Certificate of Analysis
You will get a certificate here
Go back
Log in or register to request a certificate of analysis.
Reviews 0
Read, write and discuss reviews... more
Close menu
Customer review for "Anti-CLOCK (Circadian Locomoter Output Cycles Protein Kaput, hCLOCK, Class E Basic Helix-loop-helix"
Write a review
Log in or register to review a product.
Similar products
Similar products 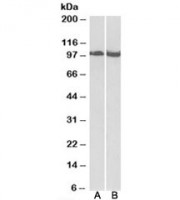