You can also order using info@biomol.com or FAX at 0049-40-85326022
Bigger quantity required? Request Bulk
Description Product Citations Certificate of Analysis Reviews 0
Description
Catenins are proteins found in complexes with cadherin cell adhesion molecules of animal cells.... more
Close menu
Product information "Anti-Catenin, beta, active (ABC) (BSA, Azide & Glycerol Free)"
Catenins are proteins found in complexes with cadherin cell adhesion molecules of animal cells. The first two catenins that were identified became known as alpha-catenin and beta-catenin. alpha-catenin can bind to beta-catenin and can also bind actin. beta-catenin binds the cytoplasmic domain of some cadherins. When beta-catenin was sequenced it was found to be a member of the armadillo family of proteins. These proteins have multiple copies of the so-called armadillo repeat domain which is specialized for protein-protein binding. An increase in beta-catenin production has been noted in those people who have Basal Cell Carcinoma and leads to the increase in proliferation of related tumors. When beta-catenin is not associated with cadherins and alpha-catenin, it can interact with other proteins such as Catenin Beta Interacting Protein 1 (ICAT) and adenomatosis polyposis coli (APC). Recent evidence suggests that beta-catenin plays an important role in various aspects of liver biology including liver development (both embryonic and postnatal), liver regeneration following partial hepatectomy. HGF-induced hepatpomegaly, liver zonation, and pathogenesis of liver cancer. Applications: Suitable for use in Immunohistochemistry, Immunocytochemistry, Flow Cytometry and Western Blot. Other applications not tested. Recommended Dilutions: Immunohistochemisty (Paraffin): Detects b-Catenin in mouse embryo sections. Requires HIER using sodium citrate buffer pH6.0 , Immunocytochemistry: Shows positive staining in LiCl-treated 293T cells fixed with methanol., Western Blot: 0.2-2ug/ml, A431 cell lysate was resolved by electrophoresis, transferred to nitrocellulose and probed with C2069-47. Proteins were visualized using an IgG (HRP) goat anti-mouse and a chemiluminescence detection system., Flow Cytometry: 1ug/ml, Optimal dilutions to be determined by the researcher. Positive Antigen Control Included: A0001-50: A431 Cells, Non-Stimulated in RIPA Buffer, Sample Buffer. Storage and Stability: May be stored at 4°C for short-term only. Aliquot to avoid repeated freezing and thawing. Store at -20°C. Aliquots are stable for 12 months after receipt. For maximum recovery of product, centrifuge the original vial after thawing and prior to removing the cap.

Caution
Our products are for laboratory research use only: Not for administration to humans!
Product Citations
Information about the product reference will follow. more
Close menu
Certificate of Analysis
You will get a certificate here
Go back
Log in or register to request a certificate of analysis.
Reviews 0
Read, write and discuss reviews... more
Close menu
Customer review for "Anti-Catenin, beta, active (ABC) (BSA, Azide & Glycerol Free)"
Write a review
Log in or register to review a product.
Similar products
Similar products 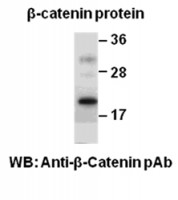 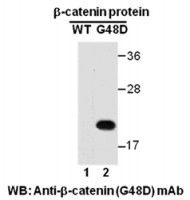 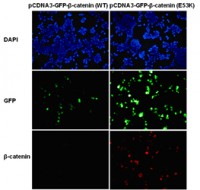 Anti-beta-catenin (E53K)
669.00€ *
Viewed
This website uses cookies, which are necessary for the technical operation of the website and are always set. Other cookies, which increase the usability of this website, serve for direct advertising or simplify interaction with other websites and social networks, will only be used with your consent. More information
Decline Accept all Configure