You can also order using info@biomol.com or FAX at 0049-40-85326022
Bigger quantity required? Request Bulk
Description Product Citations Certificate of Analysis Reviews 0
Description
The autosomal dominant cerebellar ataxias (ADCA) are a heterogeneous group of neurodegenerative... more
Close menu
Product information "Anti-ATXN1"
The autosomal dominant cerebellar ataxias (ADCA) are a heterogeneous group of neurodegenerative disorders characterized by progressive degeneration of the cerebellum, brain stem and spinal cord. Clinically, ADCA has been divided into three groups: ADCA types I-III. ADCAI is genetically heterogeneous, with five genetic loci, designated spinocerebellar ataxia (SCA) 1, 2, 3, 4 and 6, being assigned to five different chromosomes. ADCAII, which always presents with retinal degeneration (SCA7), and ADCAIII often referred to as the `pure' cerebellar syndrome (SCA5), are most likely homogeneous disorders. Several SCA genes have been cloned and shown to contain CAG repeats in their coding regions. ADCA is caused by the expansion of the CAG repeats, producing an elongated polyglutamine tract in the corresponding protein. The expanded repeats are variable in size and unstable, usually increasing in size when transmitted to successive generations. The function of the ataxins is not known. This locus has been mapped to chromosome 6, and it has been determined that the diseased allele contains 41-81 CAG repeats, compared to 6-39 in the normal allele. At least two transcript variants encoding the same protein have been found for this gene.Tissue specificity: Widely expressed throughout the body. Applications: Western Bloting: 1:500-1:2000., Immunohistochemistry: 1:200-1:1000., Immunofluorescence: 1:200-1:1000., Flow cytometry: 1:200-1:400., ELISA: Suggested dilution 1:10000., Optimal dilutions to be determined by the researcher. Storage and Stability: May be stored at 4°C for short-term only. Aliquot to avoid repeated freezing and thawing. Store at -20°C. Aliquots are stable for 12 months. For maximum recovery of product, centrifuge the original vial after thawing and prior to removing the cap.

Caution
Our products are for laboratory research use only: Not for administration to humans!
Product Citations
Information about the product reference will follow. more
Close menu
Certificate of Analysis
You will get a certificate here
Go back
Log in or register to request a certificate of analysis.
Reviews 0
Read, write and discuss reviews... more
Close menu
Customer review for "Anti-ATXN1"
Write a review
Log in or register to review a product.
Similar products
Similar products 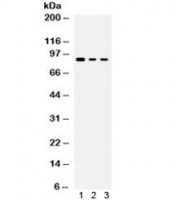 Anti-Ataxin-1
From 131.00€ *
Viewed
This website uses cookies, which are necessary for the technical operation of the website and are always set. Other cookies, which increase the usability of this website, serve for direct advertising or simplify interaction with other websites and social networks, will only be used with your consent. More information
Decline Accept all Configure