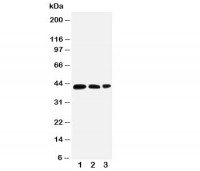 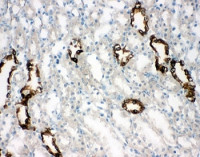 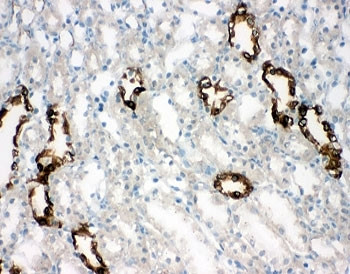 You can also order using info@biomol.com or FAX at 0049-40-85326022
Bigger quantity required? Request Bulk
Description Certificate of Analysis Reviews 0
Description
0.5mg/ml if reconstituted with 0.2ml sterile DI water. Aquaporin 2 also called Aquaporin-CD, is... more
Close menu
Product information "Anti-AQP2 Aquaporin 2"
0.5mg/ml if reconstituted with 0.2ml sterile DI water. Aquaporin 2 also called Aquaporin-CD, is found in the apical cell membranes of the kidneys collecting duct principal cells and in intracellular vesicles located throughout the cell. The AQP2 gene is mapped to chromosome 12q13, very close to the site of major intrinsic protein by situ hybridization. Investigators suggest that a defect in the gene is the basis of the autosomal form of nephrogenic diabetes insipidus. The functional expression and the limited localization suggested that AQP2 is the vasopressin-regulated water channel. Using rat kidney slices and porcine kidney cells stably expressing rat Aquaporin 2, trafficking can be stimulated by cAMP-independent pathways that utilize nitric oxide(NO). The NO donors sodium nitroprusside(SNP) and NONOate and the NO synthase substrate L-arginine mimicked the effect of vasopressin(VP), stimulating relocation of Aquaporin 2 from cytoplasmic vesicles to the apical plasma membrane. SNP increased intracellular cGMP rather than cAMP, and exogenous cGMP stimulated AQP2 membrane insertion. Atrial natriuretic factor, which signals via cGMP, also stimulated AQP2 translocation. Expression in kidney connecting tubules is sufficient for survival and that expression in collecting ducts is required to regulate body water balance. The S256L substitution in the cytoplasmic tail of the protein prevented phosphorylation at S256 and the subsequent accumulation of Aquaporin 2 on the apical membrane of the collecting duct principal cells. Protein function: Forms a water-specific channel that provides the plasma membranes of renal collecting duct with high permeability to water, thereby permitting water to move in the direction of an osmotic gradient. [The UniProt Consortium]

Caution
Our products are for laboratory research use only: Not for administration to humans!
Certificate of Analysis
You will get a certificate here
Go back
Log in or register to request a certificate of analysis.
Reviews 0
Read, write and discuss reviews... more
Close menu
Customer review for "Anti-AQP2 Aquaporin 2"
Write a review
Log in or register to review a product.
Similar products
Similar products
+ FREE T-Shirt 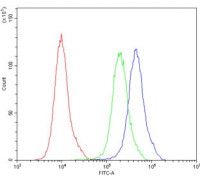 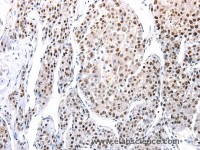 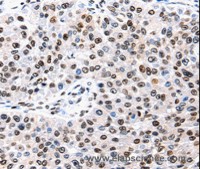 Anti-AQP2 (Aquaporin-2, AQP-2, ADH water Channel,...
From 396.00€ *
Viewed
This website uses cookies, which are necessary for the technical operation of the website and are always set. Other cookies, which increase the usability of this website, serve for direct advertising or simplify interaction with other websites and social networks, will only be used with your consent. More information
Decline Accept all Configure