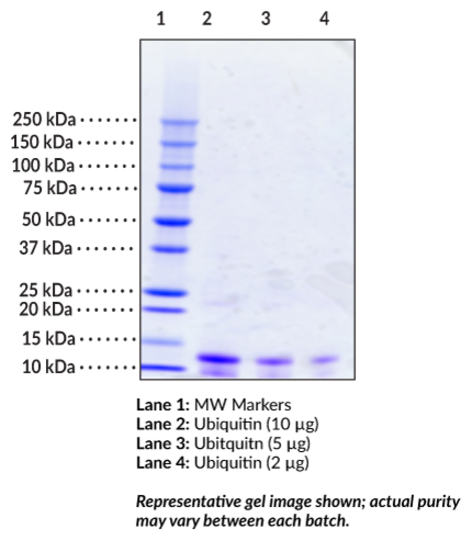 Bestellen Sie auch per E-Mail info@biomol.com oder FAX: 0049-40-85326022
Größere Menge gewünscht? Bulk-Anfrage
Beschreibung Analysenzertifikat Bewertungen 0
Beschreibung
Ubiquitin is a small protein that occurs in all eukaryotic cells. The ubiquitin protein itself... mehr
Menü schließen
Produktinformationen "Ubiquitin (human recombinant, His-tagged)"
Ubiquitin is a small protein that occurs in all eukaryotic cells. The ubiquitin protein itself consists of 76 amino acids and has a molecular mass of about 8.5 kDa. Key features include its C-terminal tail and the 7 Lys residues. It is highly conserved among eukaryotic species: human and yeast ubiquitin share 96% sequence identity. The main function of ubiquitin is to clear abnormal, foreign, and improperly folded proteins by targeting them for degradation by the 26S proteasome. Ubiquitination represents an essential cellular process affected by a multi-enzyme cascade involving classes of enzymes known as ubiquitin-activating enzymes (E1s), ubiquitin-conjugating enzymes (E2s or Ubcs), and ubiquitin-protein ligases (E3s). Ubiquitin is activated in a two-step reaction by an E1 ubiquitin-activating enzyme in a process requiring ATP as an energy source. The initial step involves production of a ubiquitin-adenylate intermediate. The second step transfers ubiquitin to the E1 active site cysteine residue, with release of AMP. This step results in a thioester linkage between the C-terminal carboxyl group of ubiquitin and the E1 cysteine sulfhydryl group. The third step is a transfer of ubiquitin from E1 to the active site cysteine of a ubiquitin-conjugating enzyme E2 via a trans(thio)esterification reaction. And the final step of the ubiquitylation cascade creates an isopeptide bond between a lysine of the target protein and the C-terminal glycine of ubiquitin. In general, this step requires the activity of one of the hundreds of E3 ubiquitin-protein ligases (often termed simply ubiquitin ligase). E3 enzymes function as the substrate recognition modules of the system and are capable of interaction with both E2 and substrate. Ubiquitination also participates in the internalization and degradation of plasma membrane proteins such as some of the TCR subunits while still ER-membrane associated. Ubiquitin also plays a role in regulating signal transduction cascades through the elimination inhibitor proteins, such as IkappaBalpha and p27. This product is expressed with N-terminal 6x-His tag which can be utilized for pulldown or detection of ubiquitinylated substrates.