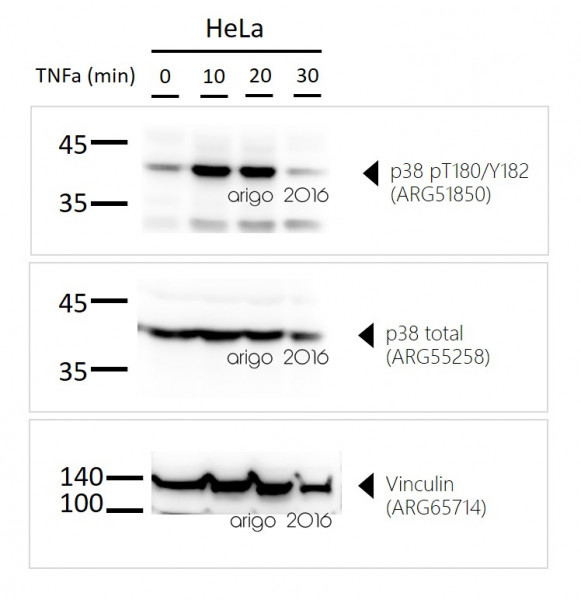 Bestellen Sie auch per E-Mail info@biomol.com oder FAX: 0049-40-85326022
Größere Menge gewünscht? Bulk-Anfrage
Beschreibung Analysenzertifikat Bewertungen 0
Beschreibung
Protein function: Serine/threonine kinase which acts as an essential component of the MAP kinase... mehr
Menü schließen
Produktinformationen "Anti-phospho-P38 MAPK (Thr180/Tyr182)"
Protein function: Serine/threonine kinase which acts as an essential component of the MAP kinase signal transduction pathway. MAPK14 is one of the four p38 MAPKs which play an important role in the cascades of cellular responses evoked by extracellular stimuli such as proinflammatory cytokines or physical stress leading to direct activation of transcription factors. Accordingly, p38 MAPKs phosphorylate a broad range of proteins and it has been estimated that they may have approximately 200 to 300 substrates each. Some of the targets are downstream kinases which are activated through phosphorylation and further phosphorylate additional targets. RPS6KA5/MSK1 and RPS6KA4/MSK2 can directly phosphorylate and activate transcription factors such as CREB1, ATF1, the NF-kappa-B isoform RELA/NFKB3, STAT1 and STAT3, but can also phosphorylate histone H3 and the nucleosomal protein HMGN1. RPS6KA5/MSK1 and RPS6KA4/MSK2 play important roles in the rapid induction of immediate-early genes in response to stress or mitogenic stimuli, either by inducing chromatin remodeling or by recruiting the transcription machinery. On the other hand, two other kinase targets, MAPKAPK2/MK2 and MAPKAPK3/MK3, participate in the control of gene expression mostly at the post-transcriptional level, by phosphorylating ZFP36 (tristetraprolin) and ELAVL1, and by regulating EEF2K, which is important for the elongation of mRNA during translation. MKNK1/MNK1 and MKNK2/MNK2, two other kinases activated by p38 MAPKs, regulate protein synthesis by phosphorylating the initiation factor EIF4E2. MAPK14 interacts also with casein kinase II, leading to its activation through autophosphorylation and further phosphorylation of TP53/p53. In the cytoplasm, the p38 MAPK pathway is an important regulator of protein turnover. For example, CFLAR is an inhibitor of TNF- induced apoptosis whose proteasome-mediated degradation is regulated by p38 MAPK phosphorylation. In a similar way, MAPK14 phosphorylates the ubiquitin ligase SIAH2, regulating its activity towards EGLN3. MAPK14 may also inhibit the lysosomal degradation pathway of autophagy by interfering with the intracellular trafficking of the transmembrane protein ATG9. Another function of MAPK14 is to regulate the endocytosis of membrane receptors by different mechanisms that impinge on the small GTPase RAB5A. In addition, clathrin-mediated EGFR internalization induced by inflammatory cytokines and UV irradiation depends on MAPK14- mediated phosphorylation of EGFR itself as well as of RAB5A effectors. Ectodomain shedding of transmembrane proteins is regulated by p38 MAPKs as well. In response to inflammatory stimuli, p38 MAPKs phosphorylate the membrane-associated metalloprotease ADAM17. Such phosphorylation is required for ADAM17-mediated ectodomain shedding of TGF-alpha family ligands, which results in the activation of EGFR signaling and cell proliferation. Another p38 MAPK substrate is FGFR1. FGFR1 can be translocated from the extracellular space into the cytosol and nucleus of target cells, and regulates processes such as rRNA synthesis and cell growth. FGFR1 translocation requires p38 MAPK activation. In the nucleus, many transcription factors are phosphorylated and activated by p38 MAPKs in response to different stimuli. Classical examples include ATF1, ATF2, ATF6, ELK1, PTPRH, DDIT3, TP53/p53 and MEF2C and MEF2A. The p38 MAPKs are emerging as important modulators of gene expression by regulating chromatin modifiers and remodelers. The promoters of several genes involved in the inflammatory response, such as IL6, IL8 and IL12B, display a p38 MAPK-dependent enrichment of histone H3 phosphorylation on 'Ser-10' (H3S10ph) in LPS-stimulated myeloid cells. This phosphorylation enhances the accessibility of the cryptic NF- kappa-B-binding sites marking promoters for increased NF-kappa-B recruitment. Phosphorylates CDC25B and CDC25C which is required for binding to 14-3-3 proteins and leads to initiation of a G2 delay after ultraviolet radiation. Phosphorylates TIAR following DNA damage, releasing TIAR from GADD45A mRNA and preventing mRNA degradation. The p38 MAPKs may also have kinase-independent roles, which are thought to be due to the binding to targets in the absence of phosphorylation. Protein O-Glc-N-acylation catalyzed by the OGT is regulated by MAPK14, and, although OGT does not seem to be phosphorylated by MAPK14, their interaction increases upon MAPK14 activation induced by glucose deprivation. This interaction may regulate OGT activity by recruiting it to specific targets such as neurofilament H, stimulating its O-Glc-N-acylation. Required in mid-fetal development for the growth of embryo-derived blood vessels in the labyrinth layer of the placenta. Also plays an essential role in developmental and stress-induced erythropoiesis, through regulation of EPO gene expression. Isoform MXI2 activation is stimulated by mitogens and oxidative stress and only poorly phosphorylates ELK1 and ATF2. Isoform EXIP may play a role in the early onset of apoptosis. Phosphorylates S100A9 at 'Thr-113'. [The UniProt Consortium]