Bestellen Sie auch per E-Mail info@biomol.com oder FAX: +49-40-85326022
Größere Menge gewünscht? Bulk-Anfrage
Beschreibung Produktreferenzen Analysenzertifikat Bewertungen 0
Beschreibung
MAP1A and MAP1B are microtubule-associated proteins which mediate the physical interactions... mehr
Menü schließen
Produktinformationen "Anti-phospho-LC3B (Thr12) (MAP1LC3B, MAP1ALC3, Microtubule-associated proteins 1A/1B light chain 3B,"
MAP1A and MAP1B are microtubule-associated proteins which mediate the physical interactions between microtubules and components of the cytoskeleton. These proteins are involved in formation of autophagosomal vacuoles (autophagosomes). MAP1A and MAP1B each consist of a heavy chain subunit and multiple light chain subunits. MAP1LC3b is one of the light chain subunits and can associate with either MAP1A or MAP1B. The precursor molecule is cleaved by APG4B/ATG4B to form the cytosolic form, LC3-I. This is activated by APG7L/ATG7, transferred to ATG3 and conjugated to phospholipid to form the membrane-bound form, LC3-II. Macroautophagy is the major inducible pathway for the general turnover of cytoplasmic constituents in eukaryotic cells, it is also responsible for the degradation of active cytoplasmic enzymes and organelles during nutrient starvation. Macroautophagy involves the formation of double-membrane bound autophagosomes which enclose the cytoplasmic constituent targeted for degradation in a membrane bound structure, which then fuse with the lysosome (or vacuole) releasing a single-membrane bound autophagic bodies which are then degraded within the lysosome (or vacuole). Applications: Suitable for use in Dot Blot, ELISA, Recommended Dilution: ELISA: 1:1,000, Dot Blot 1:500, Storage and Stability: Store product at 4°C if to be used immediately within two weeks. For long-term storage, aliquot to avoid repeated freezing and thawing and store at -20°C. Aliquots are stable at -20°C for 12 months after receipt. Dilute required amount only prior to immediate use. Further dilutions can be made in assay buffer. For maximum recovery of product, centrifuge the original vial after thawing and prior to removing the cap., , Note: Applications are based on unconjugated antibody. 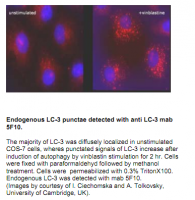 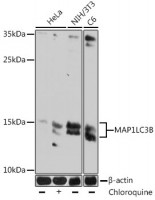