Bestellen Sie auch per E-Mail info@biomol.com oder FAX: +49-40-85326022
Größere Menge gewünscht? Bulk-Anfrage
Beschreibung Produktreferenzen Analysenzertifikat Bewertungen 0
Beschreibung
Alpha-synuclein belongs to the synuclein family, which also includes b- and g-synuclein, and is... mehr
Menü schließen
Produktinformationen "Anti-Synuclein, alpha, Nitrated"
Alpha-synuclein belongs to the synuclein family, which also includes b- and g-synuclein, and is predominantly expressed in neurons, concentrated at synaptic terminals. Synucleins may be involved in the regulation of dopamine release and transport and the modulation of synaptic vesicle function. a-synuclein is a small, presynaptic protein that is the major non-amyloid component of the pathological inclusions characteristic of a wide range of neurodegenerative disorders, collectively known as synucleinopathies. Synucleinopathies include Parkinson's disease (PD), Lewy body variant of Alzheimer's disease (LBVAD), dementia with Lewy bodies (DLB), neurodegeneration with brain iron accumulation (NBIA-1), and multiple system atrophy (MSA). Although alpha-synuclein is a soluble protein, it polymerizes into filaments in vitro under a variety of conditions, lending more support to the finding that it is the major building block of the filaments that form Lewy bodies (LBs). alpha-synuclein is known to reduce the fibrillization of the microtubule-associated protein, tau, and to bind various targets such as 14-3-3, protein kinase C, synphilin-1, Elk, and Tat-binding protein , Applications: Suitable for use in Immunofluorescence, ELISA, Western Blot, Immunohistochemistry and Immunocytochemistry. Other applications not tested. Recommended Dilutions: Optimal dilutions to be determined by the researcher. Storage and Stability: May be stored at 4°C for short-term only. Aliquot to avoid repeated freezing and thawing. Store at -20°C. Aliquots are stable for 12 months after receipt. For maximum recovery of product, centrifuge the original vial after thawing and prior to removing the cap. 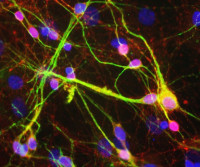