Bestellen Sie auch per E-Mail info@biomol.com oder FAX: 0049-40-85326022
Größere Menge gewünscht? Bulk-Anfrage
Beschreibung Produktreferenzen Analysenzertifikat Bewertungen 0
Beschreibung
5HT are receptors for neurotransmitter and peripheral signal mediator serotonin. It is also known... mehr
Menü schließen
Produktinformationen "Anti-Serotonin Receptor 5A (5-hydroxytryptamine 2A Receptor, 5HT2A)"
5HT are receptors for neurotransmitter and peripheral signal mediator serotonin. It is also known as 5-hydroxytryptamine or 5HT. 5HT receptors mediate the effects of serotonin as the endogenous ligand and of a broad range of pharmaceutical and hallucinogenic drugs. Specifically, 5HT receptors affect the release of other neurotransmitters such as glutamate, dopamine, and GABA as well as their activities. 5HT2A is a type of receptor that belongs to the serotonin receptor family and is one member of G protein coupled receptor (GPCR) family. 5HT2A is involved in the contraction of tracheal smooth muscle, bronchoconstriction, and the control of aldosterone production. The receptor also happens to be necessary for the spread of the human polyoma virus called JC virus. 5HT2A is widely expressed throughout the central nervous system (CNS). It is expressed near most of the serotoninergic terminal rich areas, including neocortex and olfactory tubercle. Increased stimulation of 5HT2A receptors seems to oppose the therapeutic actions of increased stimulation of other serotonin receptors in anti-depressant and anxiolytic treatments. Applications: Suitable for use in ELISA and Western Blot. Other applications not tested. Recommended Dilutions: ELISA: 0.05-0.2ug/ml, Western Blot: 0.5-2ug/ml, Optimal dilutions to be determined by the researcher. Storage and Stability: Lyophilized powder may be stored at -20°C. Stable for 12 months at -20°C. Reconstitute with sterile ddH2O. Aliquot to avoid repeated freezing and thawing. Store at -20°C. Reconstituted product is stable for 12 months at -20°C. For maximum recovery of product, centrifuge the original vial after thawing and prior to removing the cap. Further dilutions can be made in assay buffer. 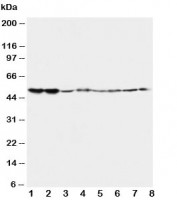 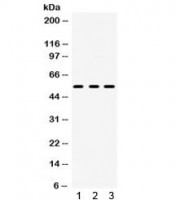