Bestellen Sie auch per E-Mail info@biomol.com oder FAX: 0049-40-85326022
Größere Menge gewünscht? Bulk-Anfrage
Beschreibung Produktreferenzen Analysenzertifikat Bewertungen 0
Beschreibung
0.2 mg/ml in 1X PBS with 0.1 mg/ml BSA (US sourced) and 0.05% sodium azide. p63 is a homolog of... mehr
Menü schließen
Produktinformationen "Anti-p63 / Tumor protein 63"
0.2 mg/ml in 1X PBS with 0.1 mg/ml BSA (US sourced) and 0.05% sodium azide. p63 is a homolog of the tumor suppressor p53. It is identified in basal cells in the epithelial layers of a variety of tissues, including epidermis, cervix, urothelium, breast and prostate. p63 was detected in nuclei of the basal epithelium in normal prostate glands, however, it was not expressed in malignant tumors of the prostate. As a result, p63 has been reported as a useful marker for differentiating benign from malignant lesions in the prostate, particularly when used in combination with markers of high molecular weight cytokeratins and the prostate-specific marker AMACR (P504S). p63 has also been shown to be a sensitive marker for lung squamous cell carcinomas (SqCC), with a sensitivity of ~90%. Specificity for lung SqCC, vs. lung adenocarcinoma (LADC), is approximately 80%. In breast tissue, p63 has been identified in myoepithelial cells of normal ducts. Protein function: Acts as a sequence specific DNA binding transcriptional activator or repressor. The isoforms contain a varying set of transactivation and auto-regulating transactivation inhibiting domains thus showing an isoform specific activity. Isoform 2 activates RIPK4 transcription. May be required in conjunction with TP73/p73 for initiation of p53/TP53 dependent apoptosis in response to genotoxic insults and the presence of activated oncogenes. Involved in Notch signaling by probably inducing JAG1 and JAG2. Plays a role in the regulation of epithelial morphogenesis. The ratio of DeltaN-type and TA*-type isoforms may govern the maintenance of epithelial stem cell compartments and regulate the initiation of epithelial stratification from the undifferentiated embryonal ectoderm. Required for limb formation from the apical ectodermal ridge. Activates transcription of the p21 promoter. [The UniProt Consortium] 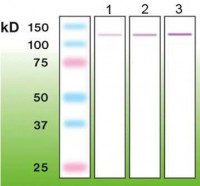 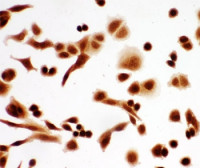 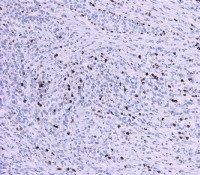