Bestellen Sie auch per E-Mail info@biomol.com oder FAX: 0049-40-85326022
Größere Menge gewünscht? Bulk-Anfrage
Beschreibung Produktreferenzen Analysenzertifikat Bewertungen 0
Beschreibung
This gene encodes a member of the nuclear receptor superfamily, and is a key regulator of... mehr
Menü schließen
Produktinformationen "Anti-NR1I3, ID (NR1I3, CAR, Nuclear receptor subfamily 1 group I member 3, Constitutive activator of"
This gene encodes a member of the nuclear receptor superfamily, and is a key regulator of xenobiotic and endobiotic metabolism. The protein binds to DNA as a monomer or a heterodimer with the retinoid X receptor and regulates the transcription of target genes involved in drug metabolism and bilirubin clearance, such as cytochrome P450 family members. Unlike most nuclear receptors, this transcriptional regulator is constitutively active in the absence of ligand but is regulated by both agonists and inverse agonists. Ligand binding results in translocation of this protein to the nucleus, where it activates or represses target gene transcription. These ligands include bilirubin, a variety of foreign compounds, steroid hormones, and prescription drugs. Multiple transcript variants encoding different isoforms have been found for this gene. Applications: Suitable for use in Western Blot, ELISA, Recommended Dilution: ELISA: 1:1,000, Western Blot: 1:100-500, Storage and Stability: Store product at 4°C if to be used immediately within two weeks. For long-term storage, aliquot to avoid repeated freezing and thawing and store at -20°C. Aliquots are stable at -20°C for 12 months after receipt. Dilute required amount only prior to immediate use. Further dilutions can be made in assay buffer. For maximum recovery of product, centrifuge the original vial after thawing and prior to removing the cap., , Note: Applications are based on unconjugated antibody. 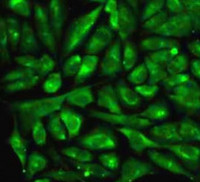