Bestellen Sie auch per E-Mail info@biomol.com oder FAX: +49-40-85326022
Größere Menge gewünscht? Bulk-Anfrage
Beschreibung Produktreferenzen Analysenzertifikat Bewertungen 0
Beschreibung
MCM5(MINICHROMOSOME MAINTENANCE, S. CEREVISIAE, HOMOLOG OF, 5)?also known as CDC46, is a protein... mehr
Menü schließen
Produktinformationen "Anti-MCM5 (CDC46 homolog, P1-CDC46)"
MCM5(MINICHROMOSOME MAINTENANCE, S. CEREVISIAE, HOMOLOG OF, 5)?also known as CDC46, is a protein that in humans is encoded by the MCM5 gene. MCM5 is structurally very similar to the CDC46 protein from S. cerevisiae, a protein involved in the initiation of DNA replication. And MCM5 is a member of the MCM family of chromatin-binding proteins and can interact with at least two other members of this family. The MCM5 gene is mapped on 22q12.3. The MCM5 gene contains 16 exons. The encoded protein is upregulated in the transition from the G0 to G1/S phase of the cell cycle and may actively participate in cell cycle regulation. UniProt Number: P33992, Gene ID: MCM5, Applications: Suitable for use in Western Blot and Immunohistochemistry (Paraffin). Recommended Dilution: Optimal dilutions to be determined by the researcher. Storage and Handling: Store at -20?C for one year. After reconstitution, store at 4?C for one month. Can also be aliquoted and stored frozen at -20?C for long term., Avoid repeated freezing and thawing. For maximum recovery of product, centrifuge the original vial after thawing and prior to removing the cap. 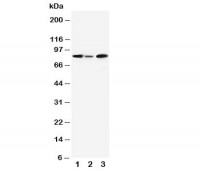 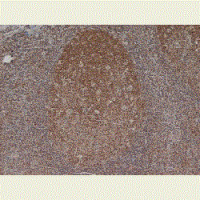 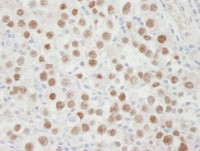